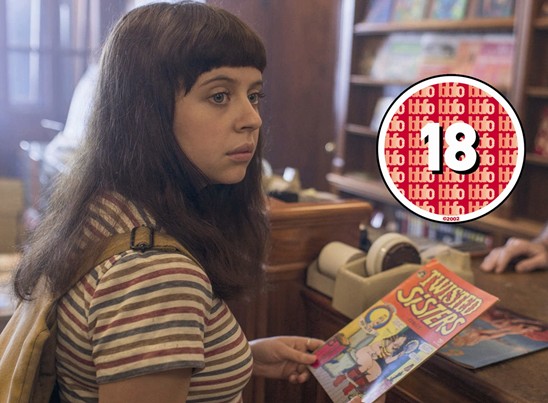 I have the good fortune to be at Vertigo for my placement and so am along for the Diary of a Teenage Girl ride. I’m seeing how the inherent conservatism of British institutions is affecting the release of a small yet possibly important film concerning women’s sexuality. I was tasked with drafting a letter to the BBFC after a meeting we had with them about changing the classification of The Diary of a Teenage Girl from an 18 to a 15, or at least changing the consumer advice. It was great to write something of substantial length that I’m truly interested in. The gist of it was that, though the film contains portrayals of underage sex, so too do other films aimed at a similar audience that received a 15, in particular Fish Tank and Kidulthood. The BBFC’s issue was the overall tone of the film, as well as the potential audience perception of child abuse. It was great to re-watch all three films (though Fish Tank required more than one menial task break) and consider the stories in context. The reason given by the BBFC for classifying Kidulthood as a 15 was that mid-teen audience would have been denied access to the film and the lessons to be drawn from it had it have been an 18. I can’t understand whats more universal than finding your sexuality and The Diary of a Teenage Girl, whether you like the film or not, is the story of a young woman discovering her sexuality and so could be a great starting point for discussion for mid-teens. In the same vein, The Diary of a Teenage Girl can be addressed using their own analysis of Fish Tank: her sexual awakening at the hands of the manipulative and irresponsible Connor informs her character development for the rest of the film.

It goes like this: The Diary of a Teenage Girl is the story of a 15-year-old girl, Minnie, her sexual awakening and with that, her relationship with her mums 35-year-old boyfriend. She is expressive in everything she does; you might say over the top, but so many are at 15. In the same way, the characters in Fish Tank and Kidulthood are 15 years old and over the top. The characters in all three films have underage sex and take drugs and all, in their own way, come to terms with themselves as sexual beings. The BBFC have a problem with the overall tone of The Diary of a Teenage Girl, because of its wistful cinematography and that it isn’t gritty enough (as Fish Tank and Kidulthood). This they say would effectively deter a younger audience from imitating what they see portrayed, no matter the vast contextual distance in time and space for British audiences to 1970’s San Francisco.

Meandering thoughts lead me to think over the past few months following the UK journey of Dear White People. I was lucky to have attended a friends screening and panel discussion in May. It’s been interesting to spend a little time thinking about the film, the BBFC in general and our talk, as part of the festival, with two of the examiners. Though I see no problem with the film’s classification, one piece of consumer advice and possible justifications for the 15 it was given is surely problematic. During our FED’s visit to the BBFC, someone asked if during the classification process issues of race were taken into consideration. The answer was that, as with sexuality and gender, any discriminatory language or violence would be looked upon within context for classification qualifiers. ‘Racial stereotyping’ is everyday.

The main problem I have with the BBFC’s perception of itself as a source of good, protecting those who need to be protected means it ignores the everyday racism in seeking to classify overt racism. In the same way, sexism played out on screen surely goes some way to reinforce such views in everyday life. Why racial stereotyping is a classification concern is beyond me when for example racial stereotyping is evident in a myriad of films from Sex & the City to Fast & Furious 7. I wouldn’t call for all instances of racial stereotyping to be militantly addressed in the classification process but rather a wider acknowledgement of portrayals of the detrimental racism that is everyday. Of course, this isn’t the BBFC’s problem – it’s everyone’s problem. Heaping anger of racism on an organisation that does a good if not wholly consistent job wouldn’t be reasonable. Then again, it’s got to begin somewhere. Singling out the obvious racist actions and language does nothing to negate inherent racism. If you’re under 15, you still see and hear, maybe act out micro-aggressions that are just as harmful. They may or may not be on screen. Why does the BBFC and the rest of society see more harm in saying mulatto more offensive that half-caste or plainly talking about culture when you mean but are too afraid to say race?

Limiting audiences from seeing sex on screen when they are or are legally allowed to be doing it themselves, or restricting the words they hear and use every day because they are too adult for them means there is less opportunity for conversation.

Basically I’ve had an interesting time thinking over the little I know of the BBFC’s classification process. I’m still trying to level my head and not be too pissed off at things that I think either really affect audience perception or accessibility. That being said, there’s definitely something to be said for writing things down (blog posts aside). It feels good to have your work be used for something important.