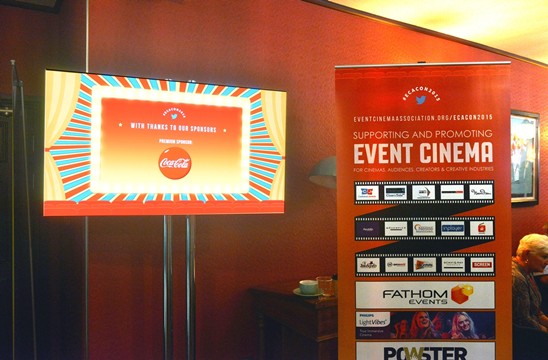 Event cinema is making a big impact in independent cinemas. Whether it’s pulling big crowds for Benedict Cumberbatch’s Hamlet, Roger Waters’ The Wall live show, English National Opera or Vikings from the British Museum, independents perform really strongly with this material. But delivering this content is not necessarily easy, and comes with potentially high risks. The thrill of the live show is also a potential headache if there are technical concerns. We sent Paul Willmott, Business and Technical Manager for Saffron Screen to visit the Event Cinema Association Conference, the annual meeting of leaders in the field to discuss this emerging source of great content for cinemas. Paul is one of our Tech Ambassadors, and event cinema is one of the key topics we’ve delivered technical advice to venues for.

Saffron Screen has been showing Event Cinema content for over four years. Initially we struggled with domestic receivers for receiving the satellite broadcasts; many problems were encountered although we never lost a show and helped out many other cinemas with recordings for encores when theirs had failed. We now use a LANsat receiver (with an Icecrypt as a backup) with the quality, reliability and support being much better.

Occasionally we also take content via DCP’s, such as Coriolanus and Roger Waters The Wall. The amount of content seems to be increasing and we find it difficult to get enough screen time to show everything we want to. The ECA conference was a good opportunity to gauge how the market is developing both from a content and a technical point of view.

Following an introduction by Melissa Cogavin, MD of the ECA, the first session of this conference was a discussion around the various methods of content delivery. There seemed to be a general consensus that streaming over the internet would be a primary method in the future (and is already the case in a number of areas across Europe). Simon Tandy of LANsat also mentioned that streaming over satellite is now possible, giving a much more reliable delivery than current satellite broadcasts.

There was one question from the audience on whether the unencrypted nature of existing broadcasts and hence the possibility (and actuality) of piracy was a problem for content providers. A representative from National Theatre Live implied that with over 650 cinemas showing their content, the risk and cost of installing new equipment to decrypt broadcasts is too high.

Following this session was a choice of topics, and I chose the Crystal Ball Time: Projections & Reflections hosted by David Hancock of IHS Screen Digest and Lucy Jones of Rentrak.

Some interesting audience figures were given, showing 2014/15 was 3% down on the previous year. It was thought that this was only a blip in the very fast growing market for event cinema.  It was also noted that the content available is widening, but with theatre, opera and ballet still doing well. General cinema is providing an increasing number of options such as 4D, Laser projection (and hence bright 3D), e-sports, HDR, IMAX. Maybe event cinema needs to embrace these technologies?

Peter Buckingham suggested that there is now less ownership of content (e.g.DVDs) and more streaming. The customer experience should be about emotional enhancement and be more immersive (sound and picture). Younger audiences want to participate more.

The next session was the Annual ECA Awards hosted by Nick Wallis. In the best independent category, Picturehouse Uckfield triumphed.

After lunch, there were a number of short presentations from Philips Lightvibes – which adds a series of light panels to the sides of cinema auditoriums that reflect the onscreen action to aid immersion – Operaworld and Powster, followed by breakout sessions. I attended a general ‘speakers’ corner’ that included an interesting overview of the market in China where, despite a huge number of screens (28,000+), due to a quota system cinemas have a limited choice of what they can show.

The final session of the day was on how to stay ahead of the game in a VOD world. Following on from Peter Buckingham’s comments earlier in the day, it was emphasised that going to the cinema should be a communal experience. You walk in anonymously, but walk out part of a community.

Content providers are now starting to think about getting content out after the event cinema showing. For example, the Met Opera are now starting their own VOD channel showing content that was in cinemas six months previously. However, it was indicated that sorting out rights for theatrical, VOD and DVD releases is very complex. Much of existing content has no long term rights, so may never be shown again. The closing speech thanked everyone for a good conference,but noted that lack of independent exhibitors attending (only three, including yours truly)!