The unseen history of women's filmmaking in Britain

The unseen history of women’s filmmaking in Britain 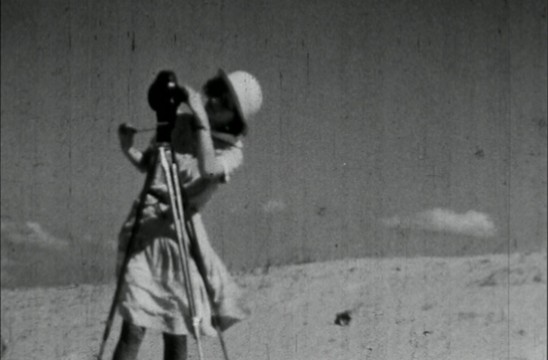 The full history of women’s filmmaking has yet to be discovered. One place that helps us grow our picture of work on film by women are screen archives. We caught up with Sarah Hill, Senior Research Associate at the University of East Anglia ahead of Archive Screening Days. She will be presenting one of the newly digitised collections of women’s amateur filmmaking, which spans 90 years of women’s filmmaking and 140 films available for the first time ever.

What were there genuine revelations to you when you were going through the archive?

The collection spans the 1920’s until the late-1980’s, so the sheer range of films was fascinating. There were 142 films in total. This included dramas, comedies, documentaries, travelogues and animated films. It was also interesting to observe how these women filmmakers worked in a variety of ways; from all-female groups, to husband-and-wife partnerships and individual filmmakers. The collection captures the changing face of Britain and abroad during the 20th century, as well as changes in film technology as filmmakers experimented with colour, sound and different ways of creating animation.

Were there any moments you think captured the spirit of the times perfectly? And what remains timeless across the collection?

I think the animated films are timeless. They are very entertaining and the skills needed to create them are very impressive as they were mostly created using hand-drawn cells. The animated films in our collection were mostly produced by lone workers, such as Mollie Butler and Sheila Graber, during the 1970’s and 1980’s. I like the idea that these talented women would set aside their own space at home to draw and create films that were centred around the themes and ideas that were most interesting to them.

How did this material come to light?

The Institute of Amateur Cinematographers (IAC) gave the films to the East Anglian Film Archive to catalogue and digitise, with support from The National Archives and The John and Joy Chittock Trust, in 2015. I have been working with the collection since February 2016 with the aim of creating a nationwide cinema exhibition programme to enable audiences to see as many of these fascinating films as possible.

What would you like to see happen to these films?

I would like for as many people to see and enjoy as many of the films as possible! Having attended various screenings, it is clear that people really enjoy watching archive films and yet they do not often get the opportunity. I hope that the success of this project will encourage more film archives to catalogue and digitise more unseen work by women filmmakers, and to make these films available to audiences.

What have you been able to find out about the careers of these filmmakers? Did many of them become professionals?

Given the time span of the collection, it has been quite challenging to find out more about some of the filmmakers. However, I have interviewed some of the animators whose early work from the 1970’s and 1980’s features in the collection, such as Mollie Butler and Sheila Graber. Sheila Graber went on to work professionally on the TV series Paddington (1975) and helped to develop the first animation courses in schools and universities in the UK. She continues to teach and make films today. Joanna Fryer, whose animated film Make-Up (1978) appears in the collection, went on to work on the film The Snowman (1982), as well as various other projects.

Women are notoriously underrepresented in today’s feature filmmaking climate. Do you think the films have any lessons for today’s women filmmakers and the powers that be?

The films reveal that women have made significant contributions to amateur filmmaking throughout its history. This has previously been largely overlooked in what has been seen as a typically male-dominated activity. This is also true of the feature film industry, as you have identified, and this needs to change. The diversity of the collection shows that women make a variety of films, and not just films with so-called womens themes, which is a common misconception.

How do you see the relationship between amateur filmmakers and professionals?

When organisations like the IAC were established in the 1930’s the term wasn’t used to suggest low quality work, as is more common today. The term amateur in this context indicates the filmmakers status as hobby enthusiasts. The collection demonstrates that there is a fine line between amateur and professional as some of the filmmakers went on to work on professional projects. Many of the films are just as technically impressive as professional films of the time, except the filmmakers were not paid to make films.

If you could only save one film from the collection, which would it be?

That’s a very difficult question! I think I would save Make-Up (Joanna Fryer, 1978). Its a brilliant animated film based on the simple premise of a woman putting on make-up that is really smart and funny. It has a great jazz soundtrack too. You can see the film during Archive Screening Day.