We spoke to Richard Hall, John Rossington and Philip Stonehouse, some of the key figures behind Lincoln Film Society, about what it takes to run a thriving and long-lasting film society. Film societies play an important part in championing and celebrating independent film in the UK. If you’re interested in starting your own film society, read this for some great tips, then take a look at Cinema For All!

Lincoln Film Society was established in 1953. How and why its lasted 63 years and is not just alive and kicking but arguably in the rudest of health, comes down to 4 factors:circumstance, the willingness to seize an opportunity, remembering that were a Society not a business and the films we choose to show.

Circumstance first. Currently,Lincoln has no fewer than 5 venues where films are shown (not so very different from the 1950’s, when there were at least 4.) There’s plenty of choice: but none of them offer anything from Europe or the rest of the world. Lincoln’s geographical setting means that to see such films usually involves a trip to Nottingham or Sheffield: but, by specialising in showcasing subtitled and limited release cinema, we found there’s an audience clamouring to see them.

One of the biggest contributors to our success is seizing opportunities. 30 years ago, we screened on 16mm in a draughty canteen to very modest audiences. Now, were in a purpose-built performing arts venue, with top-of-the-range projection kit and audiences that currently average 175 per film. How come such a transformation? 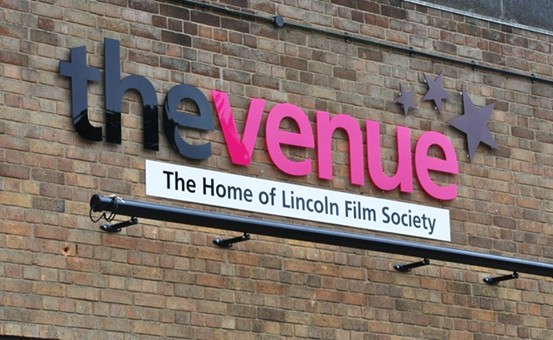 We need to go back to 1987, when we were invited to become the first community tenants of a new theatre on the Bishop Grosseteste campus (then a highly-regarded teacher-training college, now a university). Such a bespoke community venue (with its own projector room!) allowed us to develop. Upgrading to 35mm (with anamorphic lens) and a screen big enough for cinemascope, meant better quality films and projection. We began to attract new members. Within 15 years- and with the city having established a university in the meantime – we had awaiting list to join. Offering these people membership increased our revenue and allowed expansion in the programme. This fed further growth in members.

But by 2012, with digital film becoming the norm and 35mm harder to find, we took the biggest chance of all, pitching to our hosts a proposal to partner with us and install full DCP projection and surround sound in the theatre. They saw the community and business opportunities this offered and took it. This relationship has seen our membership increase to 375 and our programme grow to 26 films per season.

Our status as a Society is crucial. Our members are known to us and are friends and fellow travellers in the world of adventurous film. Most are over 50, but they are not risk-averse.They come along to socialise, have a chat and a glass of wine and watch sometimes very challenging films. Its friendly, safe and stimulating. It’s also great value for money – a single membership per annum costs 35 with no entry fee, meaning people are watching some of the best films around for as little as 1.30 a time.

So what constitutes a film society film and persuades our audience to keep returning? Understanding this is a critical element of our planning and we consulted our members on what drew them to the Society and keeps them coming back. As you might expect, there were many suggestions: one member recalled the excitement of meeting the power of Chinese cinema for the first time through the films of Zhang Zhimou. Another referred to the delights of French film. Latin American film is another discovery that has thrilled our audience. But when we discussed it further, three films stood out as exemplars of the kind we look for.

One was Rams.This beautifully shot, wryly humorous film brought us our first full house of the current season (and for some time.) This view seemed to sum up the reaction: Its a slow-burn film that draws you into the lives of its characters so that you feel you not only get to know and understand them, but you also get to know and understand the culture from which they came.

A second was Nostalgia For The Light. This elegant documentary was praised on so many levels as the kind of film they want: a visual treat which illuminated the common humanity of us all, above all a documentary that fused together literature,poetry, social history and politics in an entirely original way.

The third film was Compliance.This nomination really surprised and interested us. When we probed deeper into the reasons, the consensus was  that the film completely confounded expectations as it unfolded: what appeared to be a simple story on the surface changed direction to reveal something much deeper,darker and much more thought provoking.

Using those pointers to help, our programmers regularly attend UK film festivals and the wonderful ICO Screening Days to sample what’s coming up in the months and year ahead.  We try to ensure films on the long list have been seen by at least two people, so that no one view, genre or opinion predominates. The meeting to choose the season is always exciting, strong opinions are often voiced and the selection is both democratic and meritocratic.

As a result, we’ve managed to bring some wonderful titles to Lincoln which would not otherwise be seen, often going that extra mile to get them. We recently screened the stunning documentary, Sherpa. The process was tortuous and ended with us talking directly to the producers in Australia, but it was well worth it, with a huge audience and the highest reaction score of the season.

The programming committee is always keen to include a number of “challenging” titles among the 26 films selected each season. We have fought a long battle to get documentaries included but its now a well established genre. And we don’t shy away from films with graphic content – providing they merit inclusion!

The programmers lot is not always an easy one however! Although theme and content of all our films are clearly flagged in the programme notes,we still occasionally have “walk-outs” (increasingly rare, we’re pleased to report). Surprisingly, the film that provoked the most walk-outs recently was not one of the usual suspects: The Piano Teacher or The Duke of Burgundy perhaps (which, for all its flaws, especially its leisurely pacing, was a visual treat) with their sado-masochistic themes?; or Shame, with its sex and nudity? Blue Ruin, with its lashings of blood and gore…?

No, it was none other than that delightful, pastel-hued,classic romantic musical, Les Demoisellesde Rochefort! Well, you cant win them all.

You can find out more about the Lincoln Film Society on their website. Would your film society benefit from moving from DVD to DCP like Lincoln? Why not come to our free Film Format training in Sheffield? Thinking about starting your own film society? Check out our handy tips. For more advice, get in touch with our pals at Cinema For All, the national support and development organisation for community-led cinema.