Self-distribution in action: Beyond Clueless

Self-distribution in action: Beyond Clueless 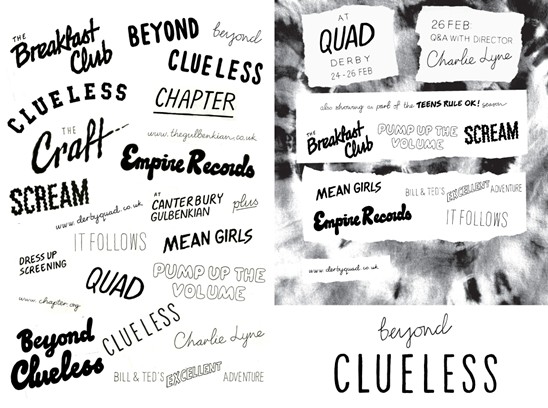 Released nationwide on the 23rd January, Beyond Clueless has been variously hailed as a “hypnotic, narcotic and dreamlike cine-essay about the contemporary American teen movie phenomenon” (by the Guardian), as “vibrant, funny and subversive” (by Dazed & Confused) and as “a commentary that will fair set your British teeth on edge” (by the Daily Mail). The film has been a labour of love for its director Charlie Lyne (previously better known as creator of Ultra Culture) and all who’ve worked on it from its Kickstarter inception to its innovative, lo-fi and very personal UK release, the style of which chimes perfectly with the film’s theme and teenage aesthetic. Below, Charlie and Dom Rafferty (the designer behind much of the film’s print marketing) answer questions about Beyond Clueless and its self-distribution strategy.

What were your initial inspirations for making this film?

Which films referenced in Beyond Clueless provoke the most nostalgia in you and why?

The 2004 teen sex comedy EuroTrip is a film that means an immense amount to me. Initially because it caught me at just the right moment when I was a teenager, eager to be swept up in a world of illicit thrills and casual nudity, but it’s also a film that’s meant something different to me each time I’ve revisited it. Like most people’s favourite teen movies, it’s not a major hit or a critical darling, but a film that spoke to me at just the right moment.

Why did you decide to self-distribute?

We’d done distribution deals in various other countries through our sales agent, but when it came to the UK we were wary of being a small film on a big slate, especially having seen how easy it is for those films to get lost in the whirlwind of the average UK release week. We figured we would be able to put in the kind of time that a distributor couldn’t afford to spend on such a small, idiosyncratic film, and make sure that every screening felt like a proper event.

Can you describe your marketing plans for the film? What kind of audience and trends were you trying to tap into? What were the surprises?

We knew there was an audience of some kind for the film because it was crowd-funded in the first place. The challenge was working out how best to reach that audience in the real world, which is obviously much more difficult than on a global platform like Kickstarter. We decided to focus on a small number of hand-tailored screenings (most of which I did Q&As at) rather than trying to book in a bunch of shows at each site. That way we could encourage all the potential audience members in a given town to get together on a specific night, which gave each screening the feeling of an event. The main surprise was how enthusiastic people were. It wasn’t half as difficult as we’d expected to get people out to the screenings, even on a Wednesday afternoon in Aberdeen.

We worked with Dom to make bespoke posters for each of the venues screening the film, and also with the ICO to decide on accompanying films we might want to show with it (for example, it’s screening in a double-bill with The Craft at the Gulbenkian in Canterbury and is heading the Teens Rule OK! season at the QUAD in Derby). Other venues have offered live scores or have put on prom nights to get the audience in the mood.

What are the benefits of going to the extra effort of curating the run of the documentary in this way?

Selfishly, it makes it much more fun for us, because each of the screenings feels unique and exciting. And I think people can tell that they’re getting something distinctive even if they’ve not been following what we’ve been doing in each city. It really doesn’t involve that much more effort than a traditional screening either – most of the time it was just a case of buying a few red party cups and putting together a Spotify playlist – but it allows the audience to get much more out of the experience.

How did you work to secure screenings around the UK? And what has it been like presenting the film to regional audiences?

We tried to just be as honest as possible with everybody. There was no point us pretending that we had the biggest film of 2015 on our hands, so instead we just explained to exhibitors what the film was, who it would hopefully appeal to, and everything we would be doing to promote it. Four stars from Peter Bradshaw didn’t hurt either.

What are your major lessons from self-distribution so far?

I have learned, by heart, the relative merits of the Wi-Fi services offered by every major British rail operator.

Can you talk us through how you came up with the idea for the Beyond Clueless posters for the QUAD in Derby, Chapter Arts Centre in Cardiff and the Gulbenkian Cinema in Canterbury?

The brief was to come up with some simple, two-tone designs with a DIY aesthetic, which could be easily and cheaply reproduced. Predictably I started by looking at punk-era DIY flyers and gig posters, and I wanted to capture some of that sense of chance composition and teenage excitement. The graphics in the film are all hand-done, so it seemed natural that my lettering should be too.

But Beyond Clueless is strictly concerned with the explosion of teen films in the 90’s and 2000’s, and I also wanted to reflect something of the fashion from those times. Although Clueless itself only features briefly in the documentary, this seemed like like an ideal source of inspiration. So the three posters with plaid (obviously!), tie-dye and stars are all inspired by specific outfits from that film.

What was inspirational to you about this particular project?

I spent much of my time at school drawing lettering in the back of exercise books, so there was a bit of enjoyable nostalgia about this project. I really like one of the official posters for the film, which features the hand-lettered labels of rows of VHS tapes. This was a nice aesthetic to tap into, and it brought back good memories of decorating mix tapes as a teenager in the 90’s.

The whole tone of the film and of the release has been really DIY. Do you think this opens up possibilities for overstretched cinema marketing departments?

The appeal of the DIY approach is the same now as it has always been. There’s something very liberating and exciting about being able to put something together cheaply that can be reproduced easily and getting it out there without big corporate backing. In some ways computers have aided this,but I really wanted to retain a sense of sitting down and doing something imperfect by hand with these posters. The way Beyond Clueless has been marketed and distributed is very DIY in today’s terms, so hopefully it’s a good match.

What other film design projects are you working on?

At the moment I’m also working on a series of large screen printed posters for classic sci-fi films. A whole different look!

Beyond Clueless is screening at cinemas including the QUAD in Derby, the Gulbenkian in Canterbury and the Broadway in Nottingham throughout February and March. For dates see www.beyondclueless.co.uk and for more advice from Charlie on self-distribution, see “10 weird tricks to self-releasing a film in the UK“.