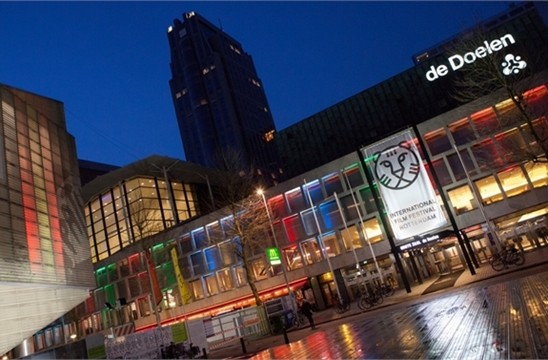 Rotterdam feels a bit like a copy of itself. Since my last visit in 2009 its runaway love affair with the worst excesses of steel ‘n’ glass neoliberal architecture shows no signs of abating. It would be hard to imagine trade had ever depended on toil at all, so complete is its recuperation (or effacement) of its industrial heritage; the city now sits like a shiny specimen in a postmodern museum. This sense of virtuality is most ruthlessly visited upon everyday transactions, with the whole city seemingly rejecting cash outright in favour of very convenient (and conveniently unpainful, for a city stuffed with financial corporations) contactless payments.

While the International Film Festival Rotterdam, itself now an historic institution in the city, also betrayed a maddening fixation with all things cashless, it’s programme offered a welcome counterpoint to the immateriality of the place, with, as always, a salutary breadth of activity, from mainstream releases to expanded cinema performances.

As part of the festivals focus on the craft of the propaganda film in the Everyday Propaganda strand, a pair of Soviet agitprop documents played, book ending the span of the USSR. Today (Esfir Shub, 1929) was a remarkably crisp, sophisticated film – here accompanied live by DJ Kevin Toma – which employed an arsenal of political devices from simple emotional pleas to rhetorical tricks, designed to catch the Western viewer unawares. What was perhaps most surprising was the variety and extent of footage shot in the West: mocking our bourgeois captors with what seemed an impressively subtle sense of the class system imposed by capitalism, not cajoling or deriding us but setting up a sense of equanimity, offering a way out of the grip in which we are caught.

Also part of the propaganda programme, Adam Curtis new film Bitter Lake, which has since been released on BBC iPlayer, was signally taut and impressive, its exegesis suggesting that not faith, but faithlessness, will prove to be the Wests problem. The film, which tessellates thematically with his earlier work The Power of Nightmares (2004), traces the current chaos in Afghanistan back to a fateful deal between the US and Saudi governments, which guaranteed oil exports to the West at the expense of leaving the extreme Islamic doctrine of Wahhabism (which still forms the backbone of political and religious ideology in Saudi Arabia) unchecked. The oil flowed, but religious fundamentalism, alongside a growing resentment of the US and its allies, also flourished.

After Britain’s disastrous recent foray in Helmand, it became clear that its strategy rested on establishing and pursuing a reductive and dangerous binary of Taliban vs non-Taliban, while in effect this was a plural battle, and most of their assailants were regular Afghani’s who saw that Britain and its allies were only reimposing the corrupt system they had fought to dismantle. As Curtis’ film and James Meek’s recent piece for the LRB demonstrate, of the manifold issues Afghanistan faces today, most have their roots in the British intervention of more than a century ago, also motivated entirely by profit. And the UK’s tacit support of Wahhabism is still strong, as the recent arguments surrounding King Abdullah’s death confirm.

Shorts programmes were hit-and-miss, with much of the stronger work screening in non-competitive programmes. This is unavoidable to some extent at any large festival which fields thousands of submissions, but is perhaps also symptomatic of the way IFFR’s shorts appear to be programmed by committee a shame, as the validation and context an individual curators name would lend each programme would benefit filmmakers and make a stronger case for programming decisions. One strong programme was The Dragon is the Frame,which included Seamus Harahan’s new film your silent face (fucking finland series) (2015); Luke Fowler’s new LUX / BBC Scotland commission Depositions (2014), The Dragon is the Frame (2014) by Mary Helena Clark, and Beatrice Gibson’s F for Fibonacci, which opened at Laura Bartlett Gallery last November.

A series of filmmaker-focus screenings accompanied the group programmes, including Egyptian filmmaker Basim Magdy and Romanian artist Irina Botea, whose films, based around the corollaries between music and music-making, and statehood or nationalism, were an interesting discovery. American artist Bruce McClure had also been invited to give a series of his signature projector performances as part of the Signals strand, which didn’t seem an altogether novel curatorial decision as McClure seems to have been involved in the festival for most of the last decade: it feels as though this section of the festival could benefit from some spring cleaning.

The three Canon Tiger Awards for Short Film of 3000 each were taken by Safia Benhaim, for La Fivre, Ben Rivers for Things and Ben Russell for Greetings to the Ancestors. The jurors, artist Beatrice Gibson, Koyo Yamashita of Image Forum in Tokyo and Dutch curator Xander Karsken’s, presented the awards with a citation for each film.

This years Signals strand Really? Really. focused on Surrealism. While it didn’t seem exactly surrealist, The Performer, featuring Polish performance artist Oskar Dawicki as himself, was an intriguing and well-realised feature-length film directed by Maciej Sobieszczanski and Lukasz Ronduda (curator of the Museum of Modern Art in Warsaw), which functioned at once as a narrative piece in its own right and as a framework in which to link several key works of Dawicki’s. The effect of the disjuncture between document and outright fiction it sets up was vertiginous, especially given Dawickis’ appearance on stage in the cinema after his apparent death on screen.

Benjamin Cooks presentation of three reels of Anne Charlotte Robertson’s Five Year Diary, lodged since the filmmakers death at the Harvard Film Archive, was unsettling, unsparing and had no happy ending but was powerfully affecting and,if not redemptive, certainly affirmative. Here, if anywhere, was the real. Despite Robertson’s desperate struggle with depression and bipolar disorder, what emerges is the effort with which she sought to undermine it and at the resolve with which she approached this unique epistolary project filmmaking as therapy, perhaps; as compulsion, as essential as breath. There is a sense, above all else, of the filmmakers presence:her pain, her anxiety, but also her endurance, her continuance; her remaining in the world.

Claustrophobic, granting access only to Robertson’s immediate environment, the films manage nevertheless to conjure an assorted army of others just off-stage the medical establishment in particular – and clothe them more vividly than any single representation might achieve. Robertson’s is a world crippled by pharmaceutical drugs, contested benefit claims and corrosion at the hands of psychiatrists. It is also a lonely place, in which lovers never materialise, parents are at arms length, true friends seem few and the last twist of the knife those close to her die. The last of the three reels shown in Rotterdam was a paean to Emily, the filmmakers niece, who dies as a result of heart complications, and the lacuna left by the little girl in Robertson’s world is painfully present.

Unsurprisingly, the Five Year Diary is difficult at times to watch, not least because of the economy it establishes, given Robertson’s situation, of the viewer as voyeur. But its very humanity and sense of integrity is captivating, particularly in the face of so much work made about so little; as urgent a portrait of an individuals life as it is an indictment of the way we commonly address mental illness.

Away from the cinemas, the Art:Film convocation on Monday 26 January introduced new projects by Hala Elkoussy, Agnieszka Polska and Phil Collins, as well as reporting on the progress of a previous Art:Film-enabled project by Mark Lewis. A typically engaged, sensitive yet unstuffy project, working with a band created from inmates of New York states notorious Sing Sing maximum security prison, Collins Mr. Sing Sing in particular sounded fantastic: timely and necessary, and perhaps most worthy of funding.

An invited audience of producers, distributors and programmers heard from each production team, with the idea that as opposed to a formal pitch this was an opportunity to hear about work seeking finance in a more relaxed and generous arena (in terms of time, at least) and it seemed as though such an exercise would continue to be useful for artists making the leap from short-form to long-form films.Whether or not they receive finance as a direct result of the meeting is not so much the point, more that they make the necessary connections to start to build the networks they will need to secure finance eventually. And if not hard cash, they would doubtless accept a contactless payment.