Today sees the final vintage film in the Made In Britain season hit screens across the UK. Below, Nigel Kneale biographer – and our first guest blogger! – Andy Murray charts the history and influence of the landmark sci-fi thriller Quatermass and the Pit… 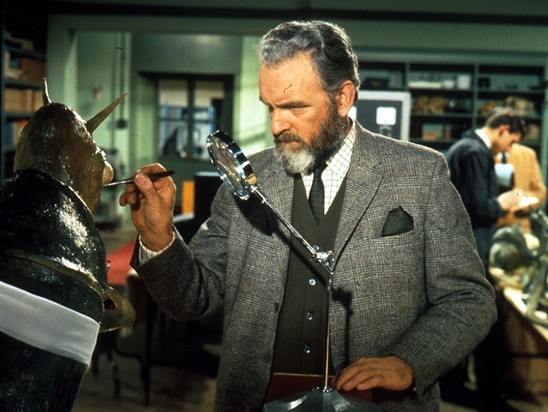 On the face of it, you could be forgiven for thinking that Quatermass and the Pit is just another Hammer film. It was made in 1967, during, or maybe just after, the studio’s heyday, with the usual cast of ‘oh, what’s he been in?’ British character actors. And undeniably, it’s scary. But actually, it might just be Hammer’s finest achievement. It’s also the culmination of the saga that put Hammer on the horror path in the first place.

Creator of Quatermass, Nigel Kneale, had first dabbled in acting and short-story writing before he fetched up at the BBC, working as a staff writer in the early days of their television drama department. Quite by chance, when a last-minute gap in the Saturday night schedules needed to be filled, Kneale made his mark with an original serial, The Quatermass Experiment, in August 1953. The nerve-jangling tale of a manned rocket launch that goes horrible awry, screened over six consecutive Saturday nights, it was an unqualified hit.

Almost immediately, the notion of a film adaptation was floated. Several parties showed an interest. Kneale even went for a promising meeting with the Boulting Brothers. But ultimately the rights were sold – for a song, and behind Kneale’s back to the Berkshire-based outfit Hammer Films.

Hammer had been ticking along happily, often making film versions of British radio hits such as Dick Barton: Special Agent (1948) and The Adventures of PC 49 (1949). As such, the first Quatermass film wasn’t a huge departure. But the eventual success of that film got them thinking that there might be money to be made in this scary movie lark.

Kneale himself didn’t think much of the film, in particular the casting of comedy American heavy Brian Donlevy as his brooding Professor Quatermass. But when he wrote a well-received TV sequel, Quatermass II, in 1955, Hammer snapped up the rights to that too. Kneale had a hand in the film adaptation, but he was dismayed when Donlevy was recalled to star.

In 1958 Kneale wrote a third BBC Quatermass serial, Quatermass and the Pit, the power and originality of which was arguably even stronger than its forebears. The titular pit is part of a building site, from which is unearthed a vast sealed capsule. What gradually unfolds is the tale of an alien invasion but one that was entirely successful millions of years earlier, and changed the very nature of mankind. In short order, Hammer purchased the film rights, and engaged Kneale to pen a film version. This he duly did, but the project took time to come together. Kneale and Hammer spend much of the Sixties being rushed off their feet. By this point, Kneale had gone freelance, and added some notable film credits to his CV, not least Tony Richardson’s acclaimed film version of Look Back in Anger. 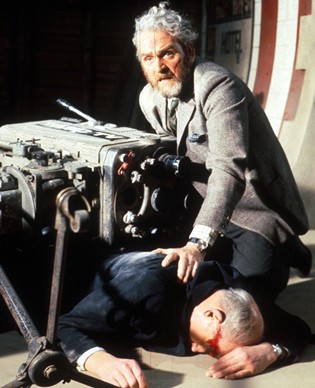 It wasn’t until 1967 that the elements fell into place for the Quatermass and the Pit film. Hammer had finally raised enough money to fund it, a cut above their usual cut-price fare, and agreed, to Kneale’s delight, not to bring Donlevy back. Instead, Scots actor Andrew Keir, a Hammer regular, took the role.

Like the TV serial, the film hinges on the idea that Martians have visited Earth throughout its history, slowly shaping man’s development. It’s almost a clich now, often credited to Swiss writer Erich von Daniken whose book Chariots of the Gods? posited an ‘ancient astronauts’ theory of human evolution. It was a world-wide best-seller, yet it was first published in 1968 a full year after Quatermass and the Pit petrified film-goers with the same mind-warping notion.

Some Quatermass cognoscenti have been dismissive of the film, insisting that the murky claustrophobia of the TV original is far superior. But there’s no denying that the film version retains all of Kneale’s best ideas and set-pieces.  The cast are admirable, and Roy Ward Baker’s direction is agreeably spirited and dynamic. Its success lies in the fact that there’s no show-boating from anyone concerned. It seems to be understood that the narrative, and the concepts that drive it, are both brilliant and original, and all that is required is to allow them to dazzle. Effectively, the script is the star.

The influence of Kneale’s masterwork is always lurking in modern sci-fi, where his original ideas have now become ubiquitous staples. As such, the legacy of Quatermass and the Pit is hard to underestimate. On home turf, Doctor Who promptly filched the film’s ‘scientists + soldiers vs aliens’ format for its 1970 relaunch, and helped itself to many of the key concepts for years to come. What’s more, on the big screen, Quatermass and the Pit reached whole generations of new viewers around the world who were unaware of its TV origins. In the US, where it was released under the more pulpy title Five Million Years to Earth, young viewers were particularly captivated. On its first release in 1967, Stephen King was 20: John Carpenter was 19. Fast-forward to 1987, the same year that King wrote his hit novel The Tommyknockers, and John Carpenter wrote and directed the film Prince of Darkness. Both are so heavily influenced by Kneale’s script that the word ‘homage’ seems somehow too generous.

Note also that when Spielberg made his film adaptation of War of the Worlds in 2005, it came with a twist. The Martian invasion isn’t seen at all. Spielberg argued that modern technology would spot them coming five million miles off. So in his version, it transpires then they’ve been here for aeons, their ships buried deep down in the ground, waiting to emerge. Surely Kneale, a great admirer of HG Wells (and of Spielberg), must have appreciated that.

Andy Murray is author of the Nigel Kneale biography Into the Unknown (Headpress, 2005), a revised edition of which is currently in the works. He’s a freelance arts writer, regularly contributing to Big Issue in the North, and he teaches Film Journalism at the University of Salford.