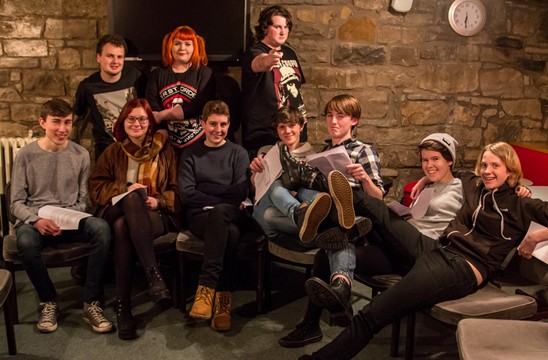 When we heard about Centre of the Moving Image‘s pan-European young programmers network, Moving Cinema, we wanted to know more. Flippanta Kulakiewicz, CMI’s Education & Learning Coordinator filled us in on how they involve young people in the cinema and the joys and challenges of cross-cultural collaboration.

This question is one that we get young people to ask each other each year at their first Young Programmers meeting at Filmhouse. Since 2012, we have hosted a group of 15-19 year old film fans who meet on a weekly basis to watch and discuss a range of films. They give feedback on film submissions for the Edinburgh International Film Festival and curate their own programme of shorts which screen at EIFF. They also write about feature films for the festival publications and present public screenings and host Q&As with guests during the festival.

Unsurprisingly, in answer to that initial question, the majority of films listed by our young participants tend to be of the American variety. What is interesting, however, is that if you ask them to list their second or third favourite film, the films either continue to be American or start ranging into quite distant territories – there is always one young person who starts excitedly running through their favourite Japanese and Chinese films. However, it’s often quite a while before European titles start getting added into the mix.

For the past two years our Young Programmers at the Centre for the Moving Image (which incorporates Filmhouse and EIFF) have participated in a project which aims to address this perceived lack of engagement with European cinema. Moving Cinema is a Creative Europe funded project which trains young people to be film programmers and, crucially, aims to reach young audiences and connect them to quality European films. An important element of the project is its focus on cross-cultural collaboration. CMI has worked alongside three other European cinema venues and their own groups of Young Programmers: A Bao a Qu in Barcelona, Meno Avilys in Vilnius and Os Filhos de Lumiere in Lisbon. 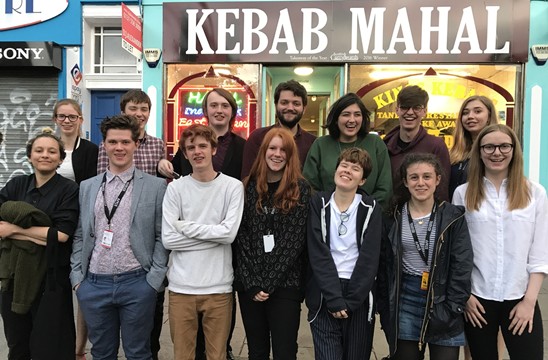 Each venue approached the project with the same goal: to connect their groups of young people and to broaden their knowledge of European cinema. This, however, is easier said than done. How do you connect young people from four different countries with the accompanying complications of languages, interests and (crucially!) timetables? How do four venues, which work very differently from each other, select titles and create a programme of European films? And how do you attract young audiences to your venue to see these films?

There is no clear-cut answer to these questions and one of the most fascinating aspects of the project has been seeing how differently each country approached and engaged with Moving Cinema. One of the most important aspects of the project was recognising and accepting the fact that the groups are very different from each other. Each Young Programmer group has its own distinct identity: the EIFF Young Programmers, for example, are a group of 16 young people, from different social backgrounds and with limited experience of engaging with cinema in anyway other than as a form of recreation. This was in marked contrast to the Vilnius group, which consisted of five film students who had a solidly academic approach to watching, analysing and writing about films. However, all the group participants shared a passion for film and willingness to share and recommend their cinematic experiences with each other.

So how did we connect the young people to each other? We wanted a simple method of communication that didn’t involve the confusion/complication of social media. Although they were unable to meet in person, the groups sent several short videos to each other, where they introduced themselves and talked about films they had watched so far. In the second year of the project a group Skype chat was organised for the first time. This online communication did mean, however, that the groups never experienced a truly direct, personal connection and I hope that in future this is something that might be rectified.

The group coordinators from each venue met in person twice a year to report on their groups progress and share feedback. It was during these meetings that a shortlist of key European films was created, the idea being that each Young Programmer group would watch a number of the same titles and then host public screenings of their favourite films. We all also passed on film recommendations from our young people to be added to the list.

Creating the shortlist turned out to be a real challenge – each country had their own suggestions and a list of twenty titles soon mushroomed into a nightmarish index of hundreds! When they were eventually whittled down, we discovered that many of the Portuguese, Lithuanian or Spanish films recommended by the other countries were unavailable in the UK in any format whatsoever. An additional number of films on the list were accessible on DVD in the UK but not available to screen theatrically. Of course, we only discovered this after we had watched the films and our young people had chosen to screen them. Top tip: remember to double-check screening availability of films before you start watching them!

Complications notwithstanding, the shortlist was certainly useful in terms of directing the groups viewing and encouraging our young people to try new films – I doubt our Young Programmers would have chosen to watch quite so many French New Wave titles if left to their own devices! Adapting the programme as we went along to suit their interests was also important. Our group were resistant to the idea of continuously watching lots of old black and white films. Over the two years we experimented with their initial reaction and mixed in more modern films such as Mathieu Kassovitz’s La Haine, Anton Corbijn’s Control and Pawel Pawlikowski’s Ida.

In the first year of Moving Cinema, each venue suggested one film to the other groups who hosted a public screening of the film and introduced it to the audience. Filmhouse screened Tom Alfredson’s Let the Right One In (selected by Barcelona) while the Barcelona group decided to show our own recommendation (Control). The public screenings developed further in the second year, with our Young Programmers choosing four European films which were shown at Filmhouse over the first four months of the year.

Attracting young audiences to these screenings was the final big aim of our project. I read the previous ICO blog by Alice Quigley with interest and certainly agree with her point about the importance of pricing tickets to suit young people. Our Creative Europe funding subsidised the public film screenings, allowing us to offer tickets for £5. We saw a notable increase of young people at these screenings as a result.

We also encouraged our Young Programmers to assist in the marketing of these films and their input helped to turn the screenings into special events. Almost all the screenings had local, Edinburgh-based guests attend for a Q&A discussion afterwards, which definitely made them more interesting and appealing to young audiences (see also Alice’s point about adding value to your screenings!)

Moving Cinema has introduced young people to new films and it has been fascinating to see their reactions to cinema that is a part of their cultural heritage, but which they would have little opportunity or desire to seek out. I’d like to think that our group are inspired by the knowledge of other young people indifferent countries who share their love and enthusiasm for film and are encourage to keep experimenting in their film viewing. Just as importantly, Moving Cinema has encouraged us as a venue to look more thoroughly at our own cinema and festival programme and consider how we can continue to attract and involve young people in our work.