Last week I went to Mobile Culture 2, organised by CultureLabel and Camerjam. The conference brought together cultural organisations with digital pioneers and other industries to catch up on the latest trends and future thinking of engaging audiences via mobile.

There was a distinct lack of film people there, but the rise of mobile engagement is a trend which should not be ignored. The speakers told us that by 2015 mobile web browsing is predicted to overtake desktop web browsing; that smartphones are already outselling PCs; that 50% of the population now own a smartphone and that within three years other types of mobile phones won’t be available; that the aggregate time people have spent playing Crazy Birds is 200,000 years; and that people are becoming more and more comfortable with this platform, as evidenced by the fact that 3 Ferrari’s were bought through mobile internet last year!

A few other interesting nuggets

The Guardian explained how mobile has redefined how people use their time engaging with them, stretching the day further than 9 to 5 and the week longer than weekdays only.

There were two schools of thought over whether QR codes were on their way in or out, with some speakers advising waiting until they became more mainstream and others strong in their conviction that they are soon to become obsolete, as devices will recognise objects themselves without the need for intermediary codes.

The Museum of London presented their Street Museum app which allows people to see historic paintings and photos of the place they are in. Their advice to organisations looking to match their 350,000 downloads with their own app was to collaborate with someone who really cares; to be authentic and integrate the app with the rest of your communications strategy; and to make it beautiful. 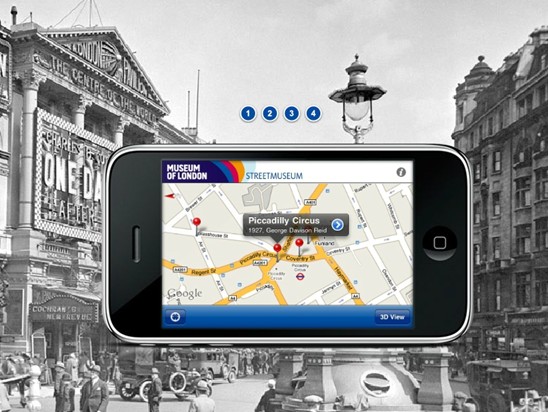 Easy Art and others warned, however, that apps require a huge investment and can be short lived, so should not be approached lightly. Marketing is key as a delegate from an app development agency put it, Our clients often think they’re putting an app out into a bookshop, when really they’re putting it into a warehouse.

The Royal Opera House outlined how they had jettisoned their web content management system in favour of a new site which aggregates data from other platforms on which they have a presence (Twitter, Flickr, YouTube).

Tips from YouTube themselves included to eat your own dog food ie. everyone in your organisation should try out your product or service before you make it public; to focus on quality content; and to optimise for the long term rather than seeking or expecting instant success. There were murmurs of approval when the speaker asserted that the best screen is the one you have with you, that people have learnt to have immersive experiences on whatever platform they have. Is this an opportunity or a threat to cinemas? Discuss.

Looking to increase visits to your site? The dark art of SEO meta data trickery is out, keeping your site constantly updated with news, blog posts, tweets is in, since Google changed the way search rankings operate.

TripAdvisor shared the concept of the Travel Cycle, an idea that people can be thinking about travel all the time using different platforms: I dream (iPad) > I plan and book (PC) > Im there (mobile) > Im back (Facebook). A compelling way of thinking about continuous engagement which could be transferrable for cultural events too.

FourSquare recommended using their platform for breaking down the demographics of visitors; for monitoring superfans who check into your venue the most; and for offering incentives to first-time and returning visitors.

There was a feeling that the cultural sector as a whole need to become more comfortable partnering with commercial organisations, and the line up of speakers at the conference including Unilever, EventBrite and digital agencies clearly reflected that sentiment.

Culture Minister Ed Vaizey popped in too, with a few things of his own to say. He’s keen to encourage more collaboration in the cultural sector, so organisations don’t reinvent the wheel but seek advice from people who are at a more developed stage than they are. He also stressed the importance of talking to young people about how they’re using mobiles and to slot into that world don’t get left behind.