How to put on a film festival for free

How to put on a film festival for free

We spoke to Neil Johns, co-founder and chair of Free Film Festivals, about the challenges of and reasons for putting on a free film festival in a city where the average cinema ticket price last year was £11.78 (Stephen Follows).

Why spend months planning a film festival and then give it away for free?

Its OK to cry during a film, of course, but how about when you’re talking to the event organisers afterwards?

Wed just finished our free screening of Bugsy Malone on Nunhead Green when a woman and her young daughter came over to where I was packing away the projector.It had been a really good crowd. Wed put up a big screen especially for the event. People had brought picnics and there’d been a massive round of applause at the end.

She told me her family had only been living in the area a few months and tonight was the first time shed really felt at home. She wanted to say thanks. I didn’t know her story or where she had come from but the tears in her eye showed how much the event had meant to her. It was hard not to feel tearful back.

Cinemas for a day

Bringing people together for a local shared film experience is what Free Film Festivals is all about. We turn local venues into a cinema for the day from pubs and community centre’s to parks, cafes and even a cemetery.

It all started when three of us got together in Peckham,south London, in 2010. We loved film. We loved our neighbourhood. We wanted to tie the two things together and make everything free so everyone could come along.

The first Peckham &Nunhead Free Film Festival included screenings on a multi-storey car park roof, in a wildlife garden and at Soutwark Asian Centre. Over 400 people came to our outdoor screening of A Matter of Life and Death in Nunhead cemetery. People were scrambling over the walls to get in. Since then the festivals happened every year, with new people coming forward each time to help.

The idea soon spread to New Cross & Deptford, Herne Hill and Camberwell  each planned by their own team of volunteers. They came up with ideas like bike-powered screenings and shorts evenings for local filmmakers. A screening of Buster Keaton’s The General on a big screen outside Herne Hill train station, with a live piano soundtrack, was one of my favourites.

Today there are 12 Free Film Festivals. We’ve screened over 200 films this year in parks,shops, schools, a lido, churches, hospitals, libraries, cafes, pubs, a football club and even the Salvation Army training college. There were filmmaking competitions and animation workshops too. 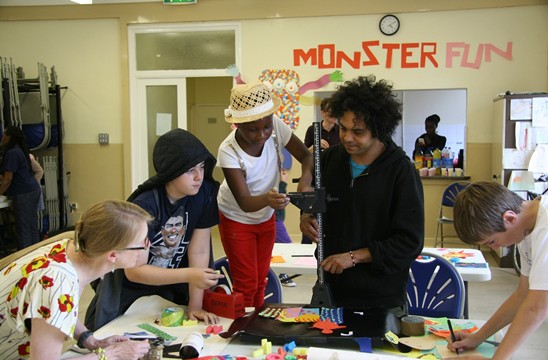 Streatham Free Film Festival. Something that started as just an idea has become a real crowd pleaser and the sense of pride continues on long after the festival is over. We have all made new relationships within the community, including with local businesses. Two of our volunteers have gone onto start a film production company together. And everyone’s had fun with it,including dressing up for PR events on the high street!

Projectionist Fazhan Ahmad started volunteering a couple of years ago. Its a good way to make a lot of people very happy, he says. I like the techie side of it but really its about creating something that everyone can enjoy because you don’t have to pay.

Things can sometimes go wrong, of course. When our generator failed in the middle of an outdoor screening, a neighbour opened her back door and let us use her power supply. And when the blu-ray of ET was mislaid minutes before an outdoor screening we just asked the audience if anyone had a copy at home and could pop back to get it. Fortunately someone had (and did). Its not great for the organisers blood pressure but for the audience its another way to get involved!

So how do we keep it all free? Volunteers apply for small grants from their local council or Film London, for example, and we’ve also been known to shake a bucket to help raise a few quid towards future events. Some Free Film Festivals crowdfund or hold fundraising screenings too.

I wouldn’t have had the confidence to start a festival in my area without meeting the Free Film Festivals family, says Mike Cooper of the new Guildford Free Film Festival, which starts next year. Knowing that there is such a wealth of experience and knowledge to fall back on swung it for me. Even though the problems I’ll face may be different from those in London because of the nature of operating in a medium sized market town rather than in the metropolis, it gave me great confidence knowing I can ping off an email or pick up the phone and at least be pointed in the right direction. 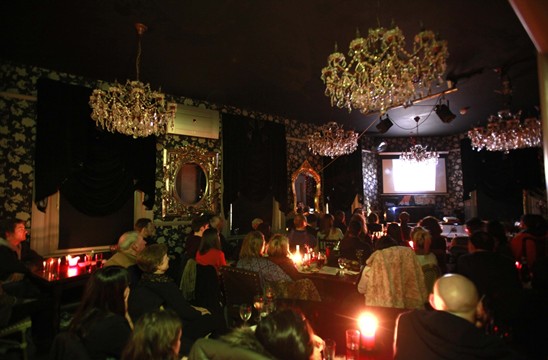 People love Free Film Festivals events for all sorts of reasons and get in touch to say so. Really amazing idea. Loved the film choices and venue setting. I like staying up late and eating popcorn (Lois, 6).

The audience at our screenings aren’t consumers or customers.They are as much part of the event as the film they are watching. Perhaps that’s why the woman and her daughter in Nunhead felt so at home.