From streaming to cinemas: careful curation with MUBI

From streaming to cinemas: careful curation with MUBI

MUBI is an online film service, now approaching its ninth year in operation. Originally a home for hardcore cinephiles to separate their Ozu from their Ozon, it now boasts over 100,000 subscribers worldwide. MUBI’s catalogue is not the broad appeal selection of films familiar from other platforms. Instead you’re just as likely to find artists’ shorts such as Peter Tscherkassky’s The Exquisite Corpus,classic films such as Billy Wilder’s Stalag 17, recent arthouse favourites like Pablo Larrain’s The Club or exclusive new work like Junun by Paul Thomas Anderson. Its a far cry from Orange is the New Black, but MUBI have courted the affections of the film faithful through a combination of careful curation, true passion, technological smarts and market differentiation.

Now they are entering the theatrical distribution market in a big way. Having worked with New Wave Films earlier this year on an ambitious co-release of Miguel Gomes’ Arabian Nights trilogy, their slate includes Mathieu Amalric’s The BlueRoom, Cannes Directors Fortnight prize-winner The Happiest Day In The Life Of Olli Maki and controversial Berlinale title I, Olga Hepnarov among others. We spoke to Tania Sutherland (Director of Marketing) and Chiara Maran (Programming Director) ahead of Screening Days in Sheffield, where venues will get their first chance to see The Blue Room and meet the team from MUBI. 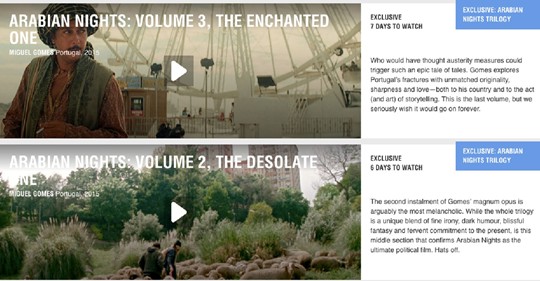 Some of the key ways in which MUBI connects with its audience will be familiar to cinemas, as curation and a love of cinema are at the heart of everything MUBI does. Almost everyone will be familiar with the thousands of channels but nothing on feeling that comes with multiple online subscriptions. MUBIs advantage is its limitation: there’s only ever thirty films on the platform at a time. A new film gets added each day and the oldest drops off. With these limited options, you’re assured that the films were handpicked, rather than acquired as part of a bulk deal. Much like a cinemas programming(carefully selecting titles to fill limited screen space from the bulging release calendar) MUBI offers a curated approach. “The model itself is what allows us to curate them. We can spend time with each film,” says Chiara.”Having thirty films online at any one time makes it like a festival that everyone can attend. We like to think about it as the biggest digital cinema in the world. In a cinema, films are there for a week or two weeks and that’s the same for MUBI.”

As much as MUBI takes cues from the cinema experience,they aren’t keen to replace the big screen. “The dark room and the big screen;those very physical elements are key to me. The level of commitment you have with a film when you are in a cinema is completely different,” says Chiara. “We release films theatrically because we believe in the cinema fundamentally. But not everyone lives in London or Paris, so if these films are on MUBI they’re able to access them.” 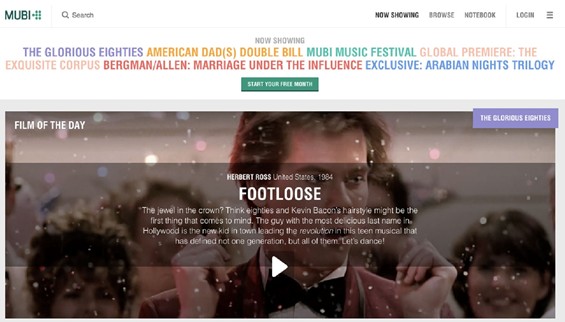 The platform has changed a lot since its inception under the banner of The Auteurs. Originally, the company’s film listings segregated films into MUBI and Not a MUBI: true auteur cinema and material that fell a little short of that. Today, although theyre a broader church, they are still partial.”We’re an opinionated brand and we want to be perceived as such, because we’re here to propose some films to you.” That said, they’re not the kind of people to look askance at your interest in Magic Mike XXL. “The context is what we’re good at building: any film in the right context can be open for analysis,” says Tania. “You can be serious about not serious films. We want to be very inclusive and present an eclectic branch of film and create unexpected links between them.”

That eclecticism extends to broadening the availability of titles available in the UK. Film fans who look enviously at festival reports, praying for a screening on our shores, often get their chance via MUBI. Isiah Medina’s 88:88 is a good example: lauded at Toronto and Locarno, this highly experimental debut feature would be a risky proposition for theatrical distribution. MUBI took up the opportunity to release the film worldwide exclusively, only a few short months after its festival debut. “Its an opportunity for young filmmakers to get their film out: one push of a button and its online,” says Tania. “Relatively soon, the theatrical dream for films, which I completely understand, is going to mutate. Films like 88:88, the whole life of the film is digital. Lots of films can have a different life: a year in festivals and then online.” 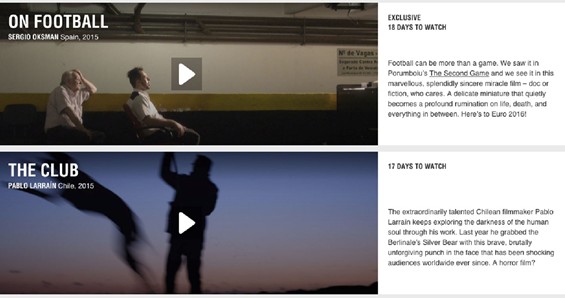 MUBI sees a future with many filmmakers electing this model as the best choice for their project. Unlike a cinema, which must rely on capturing audiences on a film-by-film basis, MUBI’s job is to maintain audiences and subscribers. Novelty and risk play a bigger part in this environment. “There are new ways of making films that we definitely want to support. We are a home for new projects and new distribution models. There’s a new audience for that,”says Tania. One such partner was Paul Thomas Anderson, who, as a subscriber and a fan of the service, directly approached MUBI to be the home for his unconventional medium-length music documentary Junun.

When asked for the secret of their success at gaining regular subscribers for material that isn’t surefire box office gold, MUBI refer to their partnerships, especially with organisations outside film. It’s people who are generally interested in culture music, museums,literature  that appreciate MUBI: people with limited time to browse who want assurance that they will see something compelling. Besides that, its passionate, considered curation that is its USP. I wanted to know what comes first when selecting films: rights availability, balancing the titles available on the platform, things that have proven track record or simply personal preference? “Curation is at the absolute core of our model. Curation comes first, but it inherently implies balance, and the will of establishing a dialogue with our audience, and a desire of growing that audience every day with every new film,” Chiara tells me. “It also involves dealing with rights availability, but even if we are ultimately limited to the confines of what is possible, we really try to push boundaries and think out of the box.”

MUBI’s mission seems to be to help you find the next film you love that you’ve never heard of so I was keen to ask the team which films they’ve discovered while working on the platform. “I was finally able to watch Nicholas Ray’s In a Lonely Place, which I absolutely recommend to any film noir fan,” says Tania. “And one of my recent favourite’s is the newly restored version of Masculin Feminin by Jean-Luc Godard, which is a pure gem.” Of the hundreds of titles Chiara has watched for the service, she picks out “O Futebol (On Football), a film about football without football in it, which is now playing on MUBI in synch with the Euro 2016. A very small movie that truly deserves an audience. A moving father-son relationship that reflects at the same time on the possibilities of cinema; a little big film.”