From Doodles to Digital

From Doodles to Digital

Posted on April 12, 2013 by Kristina Johansen-Seznec

Kristina Johansen, of Dundee Contemporary Arts was one of the participants of the ICO Creative Digital Marketing course, which ran over a six month period, encouraging participants to experiment and pilot new approaches in their venues or film festivals.  Here she talks through her experience of the course and shares what was learnt from her campaign.

I was excited to attend the ICO’s Creative Digital Marketing course way back in September 2012. Being relatively new to the world of marketing cultural cinema, I was looking forward to meeting people working in the same field from across the UK as well as to being inspired by new digital marketing initiatives.

What followed were a jam-packed two days where we were given a series of workshops and presentations from leading industry figures and agency representatives who told us about a selection of the brightest and the best in digital marketing practice. From the secrets behind Secret Cinema’s social media campaign to the Royal Opera House’s new dynamic data strategy there was lots to learn and be inspired by. But the most fascinating and refreshing element of the sessions was getting to meet with peers working in similar organisations. 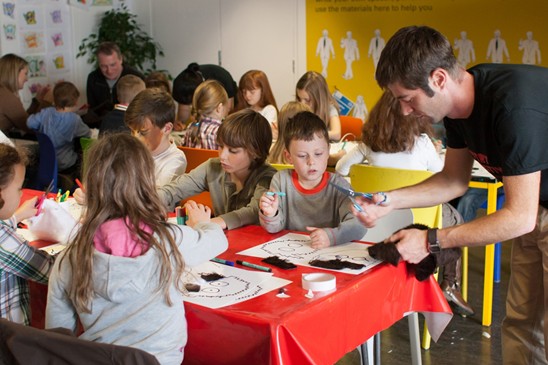 Whilst it is great to hear about cutting edge developments and best practice, sometimes what is most inspiring is hearing about people in the front line, working on real projects with all the real constraints of working for a publicly funded arts organisation. One of the most interesting initiatives discussed on the day was the Watershed’s post-it note analogue tweet project, which allowed the audience to respond to Lars von Triers controversial film Antichrist using just post-its stuck to a noticeboard which were then shared digitally.

Following the sessions all the participants were challenged to take one idea from the two days and try and implement it when they returned to the office (easier said than done with an ever-ringing phone and overflowing inbox) and I thought that Watersheds analogue tweet idea might work for us. 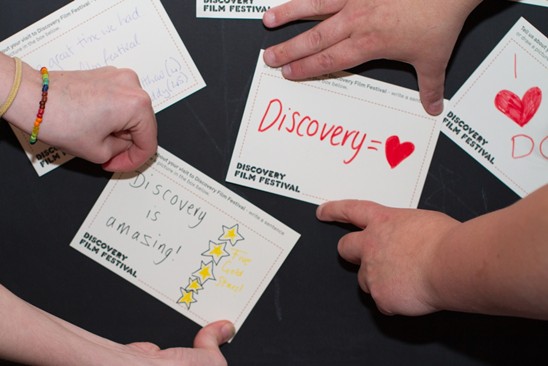 At DCA we have an active Twitter and Facebook community and I wondered if this would be a way for us to bring some of that interaction into our building space. We decided to take the idea of analogue tweets and apply it to one of our biggest events of the year the Discovery Film Festival.

Discovery Film Festival (or just plain Discovery as we call it behind the scenes) is Scotland’s International Festival for Young Audiences. It is now in its 9th year and runs over two weeks from the end of October to the start of November. These two weeks comprise three public weekends that include film screenings, workshops and a related exhibition in the DCA Gallery, and on weekdays we welcome school and college students from across the local region for screenings and gallery tours.

For this we wanted to give our audience a way to tell each other and us how they felt about the festival. Because the festival is aimed at children and young people we didn’t want to rely on written comments. So we came up with the concept of postcards that provided a space for a drawing or comment depending on how people wanted to respond. 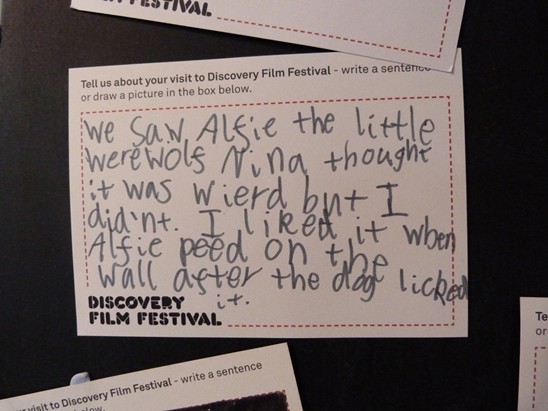 The postcards were handed out at all Discovery events, from screenings to workshops, and the completed cards were displayed on A-Frame boards in the public spaces of DCA. On the back of the postcards we left a space for people to add their contact details to our mailing list so the postcards also provided a valuable opportunity for data capture.

We got lots of responses, particularly on the opening weekend, which featured a gala screening of Alfie the Little Werewolf. Lots of the children and adults who saw the film took the opportunity to tell us what they thought, including drawings of scenes from the film.

We then turned the analogue felt pen doodles into digital 0’s and 1’s by tweeting and sharing photos of the front of the postcard with our followers, who liked and shared them in turn. We were really happy with the project, it provided a way to animate the space in our building with visual representations of how the festival made people feel. Next year we plan to improve on it by empowering our volunteers to tweet and share the images more frequently using our newly improved wifi network. 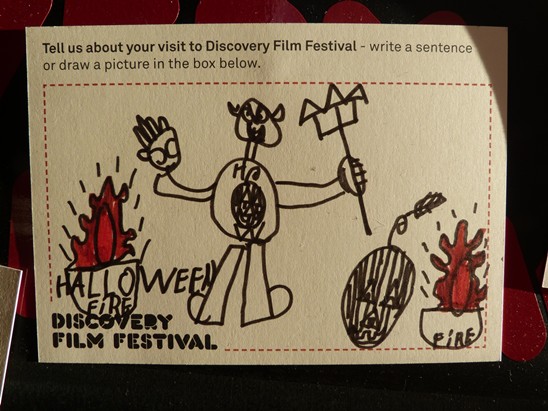 The second session of Creative Digital Marketing was held this February 2013 where we all came together to present the results of our pilot projects. This was a fantastic opportunity to hear real stories and learn from each others successes and failures. I was really encouraged by the positive feedback I got from my presentation and was inspired by everyone’s enthusiasm and ideas.

Projects which stood out for me included: Jo Comino’s analogue tweet strategy for Borderlines festival 2013 (which you can read about on the Guardian Culture Professionals Blog), Andrew Knights twitter film meet for Broadway cinema in Nottingham – check it out at @broadwaychat – and BFI’s experimentation with expanded audience engagement through Pinterest. 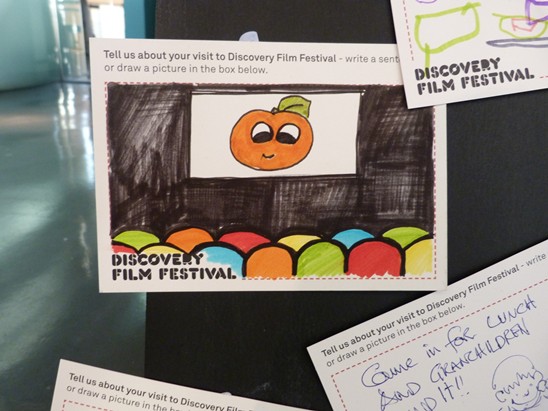 The presentations provided a great jumping-off point for discussions. Hot topics of the day included: how to get the best from volunteers on social media whilst trying not to worry too much about your brand; what was Pinterest for and how it could be used for cinema marketing without infringing copyright; and how digital content creation can blur the line between programming, marketing and audience development.

It’s impossible not to feel energized by my time on the ICO course Creative Digital Marketing. It was a fantastic and valuable experience for me and I know I brought some great things back to the office as well as meeting a brilliant network of people.

And an excellent round up of Social Media top tips is here.