Running a rural film festival this time of year can be a bit like taking part in a road movie of your own making. Sometimes the view through the windscreen can look a little like a scene from Rams.

Borderlines Film Festival runs for 17 days and plays in 26 locations. These range from cinemas like the indie kinokulture, set up in a converted chapel in Oswestry and able to screen 35mm and digital prints; arts centre’s like The Courtyard in Hereford; and Victorian red brick Wem Town Hall. It takes place in assembly rooms, village halls ,pubs and churches all across Herefordshire, Shropshire and the Welsh Marches. On the map it occupies a large splodge covering much of the part of Western England that borders into Wales: a total area of approximately 2,000 square miles. The landscape changes markedly from one end of the festival to the other. 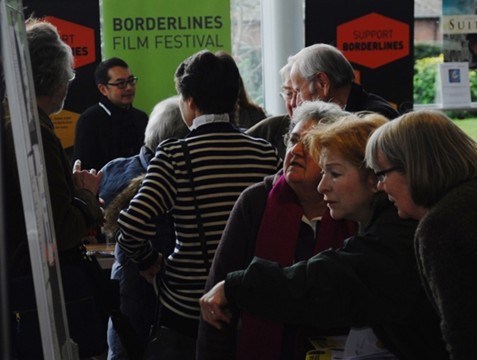 What festivals do, why they’re held, is to bring people together, generally in one place. How is it possible to maintain a sense of festival identity across such a spread of venues? The key is networks and that’s where the annual winter road trip comes in. Though the core of the festival is just two members of staff (Naomi Vera-Sanso, the Festival Director, and myself), we draw on the expertise and resources of a vast range of people, our partners, the venue promoters, their staff and volunteers.

On our road trip, we deliver bright yellow road signs to help film-goers find their way to their cinema up some very dark and windy country lanes. The sheer bulk of the signs and their wooden posts mean that we can’t just send this stuff through the post, but in actual fact, distributing it personally is part of a subtle bonding exercise. It represents contact. It helps you understand where people are coming from, in a lot of different senses. You’re told before you set off, “Using our postcode on the sat nav will take you to somewhere else entirely. Make sure you take the third turning off the main road after the roundabout, not the second, and after a mile look for the cardboard sign to Brockmanton that’s replaced the original, down the dip and were by the clump of trees on the right as you reach the top of the hill.” 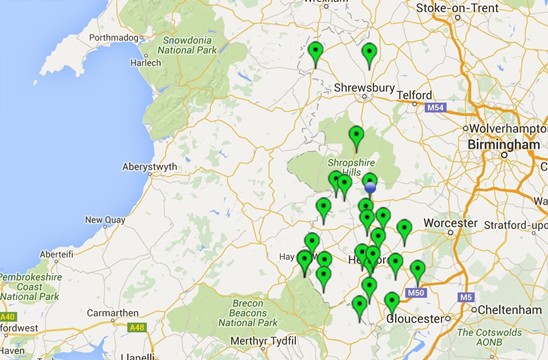 Bad communications are one of the undeniable challenges that rural film exhibition has to face. It’s not just distances: broadband under-performs, and there’s barely a mobile phone signal to be had in some parts. That means kissing the idea of live tweeting goodbye. But the effort of making contact makes it all the more worthwhile, whether it’s a quick exchange over a garden gate or sitting down over a cup of tea for a longer chat, as I did with William Hazelton, the Flicks in the Sticks promoter for South Herefordshire market town Ross-on-Wye where screenings take place in St Mary’s Church Hall.

I asked William why the Korean thriller A Girl at My Door (subtitles of course) was one of the venues two choices for Borderlines. People expect it, he said. We get a completely different crowd in for the festival. There’s a group from the Black Mountains whose members come down regularly every year for the Borderlines shows. It’s a wonderful opportunity to see film from other countries,especially countries whose real culture we know little about.

He added, Flicks [the long-established and pioneering rural touring scheme that operates throughout the area] has really created a cinema audience here out of nothing. People just didn’t go to the cinema. They’d fallen out of the habit. Now they’re talking about new releases and travelling further afield to catch the films they want to see.

We’ve learned a lot about rural audiences in the fourteen years we’ve been running the festival – I’ve been responsible for the marketing for seven of those – so here are my five tips:

Rural cinema exhibition can be a long, slow, painstaking ride but when you get there, it’s a rewarding and often exhilarating one.

Borderlines Film Festival runs from Friday 26 February to Sunday 13 March 2016, borderlinesfilmfestival.org. The festival is programmed by David Sin and Jonny Courtney at the ICO, bringing a record 24 previews among 97 films playing this year’s festival.