Cinema can have a profoundly restorative power; the ability to lift you out of yourself and change your emotional state as well as entertain you. It’s partly the film you’re watching and partly the total immersion of the experience – sitting in the dark in an audience, you focus only on the screen. If you’re unlucky enough to be in hospital for months, the escapism of cinema is particularly valuable to you. MediCinema, an organisation that currently runs seven cinemas in NHS hospitals and clinical settings throughout the UK, is based on the principle that hospital cinema provision is therapeutic and should be as widespread as possible. We spoke to their Chief Executive Kat Mason about how their cinemas operate, and the valuable impact of their work.

MediCinema was founded in 1996 by Christine Hill MBE. She had a background in film, and after volunteering in hospitals realised that if you’re in hospital for a long stay – away from family and friends, undergoing potentially unpleasant treatments and worried about your recovery – it’s essential that you have activities to occupy your mind. Realising that film screenings could entertain patients, offer them an opportunity for emotional release and give them a sense of social occasion largely missing in hospital, she wanted to bring cinema to patients dealing with complex illness and injuries. The first cinema was opened at St. Thomas’s Hospital in London in 1999, sited in a former lecture theatre.

Who comes to screenings?

The aim is to make it as accessible as possible for any patients who want to attend. Screenings are completely free for all patients and their family members and friends, enabling them to share an enjoyable experience together off the ward. MediCinema’s have traditional raked seating, but more poorly patients can attend in wheelchairs or hospital beds, and can bring any necessary equipment such as drips, oxygen masks or monitors along with them. Patients are given tickets with their clinical information on, and a proper handover from NHS nurses to MediCinema’s nurses, so they’re still safe and under excellent medical care even when they’re in the screening, at no expense to the NHS. Patients can attend whether they’re in for a short or long-term stay. 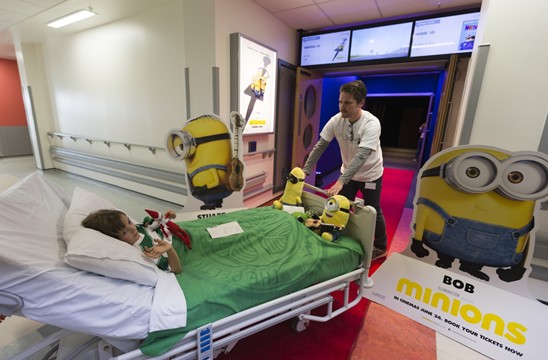 Where are your cinemas?

The first MediCinema at St. Thomas’s in London is still running, with two adults’ and one childrens’ screening per week. Nine years after St. Thomas’s, we got our second site in Glasgow Yorkhill Children’s Hospital (now part of Southern General Hospital) and other sites have followed including Newcastle’s Royal Victoria Infirmary, the Minstry of Defence Medical Rehabilitation Centre at Headley Court (serving returning servicemen and women) and the Serennu Children’s Centre in Newport, a holistic centre for children and young people with disabilities or developmental difficulties. Suitable rooms are identified in each venue for renovation into a cinema, and we purposefully make them visually distinct from the rest of the hospital – painted either black or dark blue, with colourful chairs – to emphasise that this is a different type of space.

How is MediCinema staffed and run?

We’ve ten permanent staff members – four full-time in our central office, five part-time out at sites. We hire in nursing staff per screening and per shift and our cinema managers now handle projection as well as overseeing each site. We hire in freelance technical assistants as required and depend on a brilliant freelance Technical Manager, Andy, who goes from site to site as needed. In addition we rely on a dedicated team of volunteers who assist at each screening, primarily helping to deliver patients on and off the wards. All MediCinemas are fully digitised with films screening from DCP, though we’re looking forward to more delivery via download, as delivering and collecting DCPs can be tricky in busy hospitals!

How do you fund your cinemas?

Funding comes from quite a broad variety of sources including corporate sponsors, charitable trusts and foundations and private individuals. We hold special fundraising events, and every year run a Christmas Appeal. We depend on the support of the distributors, who let us screen films for free. We’re also lucky to have a roster of celebrity patrons (including Ken Loach, Mike Leigh, Daniel Day-Lewis and Helen Mirren) which boosts our visibility and helps us in advocating for funding.

How do you choose your film programme?

Films are chosen centrally by our programmer, but individual sites also feed back to us on requests or titles that may hold a particular appeal for their patients. Distributors often give us films before their public release which is lovely, as it enhances the idea of our screenings as really special events. We tend to choose mainstream titles, usually drama or comedy, because escapism is key. Films with good marketing and lots of obvious star appeal are good draws – this is of course generally true outside hospital as well, but any extra angle is particularly helpful when patients may be feeling very unwell, and need extra persuasion to come along. We sometimes get special visitors along as well – for example Mark Hamill came along to Guy’s Hospital for a special screening of Star Wars on May 4th (Star Wars Day!) and met with patients, which was a fantastic event.

Other than that it depends on the site and its patient focus. At Headley Court for example, a lot of returned servicemen and women have been through severely traumatic experiences, and may be undergoing intensive physical rehabilitation for life-changing injuries, so we offer a mix of films including action and drama; relaxing or inspiring titles, or those that may offer an opportunity for catharsis and emotional release. We also run family films there, so patients can watch them with their families when they visit. For older audiences elsewhere we sometimes programme classic films, which can be comforting for patients with dementia. We tend to hold screenings in the evening, but also run the odd matinee.

What are the benefits for patients?

We get fantastic feedback. Engagement with patients is the whole point of MediCinema, so we evaluate our screenings constantly. Studies into the benefits of cinema therapy have shown that film screenings make a difference to how patients feel, and MediCinema audience members report that their pain response drops during screenings, as they’re so wholly distracted. Various aspects of going to MediCinemas are reported as being beneficial – some people highlight the escapism and absorption in film, some the social interaction and having something to talk about besides the day-to-day of hospital life and their treatment; for others part of the appeal is simply the journey away from and back to the ward.

One of the interesting things to note for other exhibitors is that people who attend in-hospital screenings often say that MediCinema gets them back into the habit of watching films in the cinema, and they may therefore be more likely to go to start going to other local cinemas when back at home. It’s also interesting for exhibitors to think about the therapeutic benefits of film – even though they’re not based in a clinical environment, there are so many local groups that could benefit from regular film screenings in the community.

What are your future plans?

Firstly, we want to consolidate and expand in our existing sites – increasing the number of screenings and integrating with more external groups keen to access and benefit from our facilities. Secondly, we want to open more MediCinemas in the UK. Ideally we’d have twenty sites by the end of 2020, so we’re seeking funding to get this off the ground. We’re also looking further afield – our sister organisation, MediCinema Italy opened a facility in University Hospital Agostino Gemelli in Rome last year, and we’re keen to expand with similar sites abroad. Essentially, we want to reach the maximum number of people. At the moment, we serve 19,000 people per year, but this would rise to 60,000 if twenty UK MediCinemas were built – and we’d love to spread the benefits of our work further!

For more information about MediCinema or to donate to their work, visit their website.