Each year in the queues in Cannes there is the obligatory chat about what has been the best film people have seen, what was terrible, and as the festival meanders on the chat becomes, “Is it a good year?”… like a fine bottle of wine from Côte de Provence! So, was it a good year? For my part the answer is yes. I saw some very accomplished art house fare that will hopefully make its way to the screens of UK cinemas. Here’s an overview of a selected few (I haven’t included the one film that I thought was dreadful – but happy to divulge if I see you in a queue!).

My Favourite Fabric from director-writer Gaya Jiji tells the semi-autobiographical story of Nahla, a young woman in her early twenties growing up in Damascus, in the spring of 2011 at the start of the Syrian revolution, who is about to meet her intended spouse Samir for the first time as part of an arranged marriage. Samir, who now lives in the USA, is looking for a Syrian wife who he can bring back to America to start a family of his own. Nahla, who is bored with her daily monotonous job in a local clothes store, is intrigued by Samir and the idea of marriage, especially when the people involved know so little about each other, but doesn’t show the requisite amount of gratitude and ritual courting that is expected of her. Sensing the loss of Samir’s attention, Nahla retreats into her fantasy world with her imaginary lover, and befriends Madam Jiji, the charismatic neighbour who has opened a brothel upstairs.

With great central performances from the mesmerising Manal Issa as Nahla and Ula Tabari as Madame Jiji , this is a rarely seen story (especially from such a female-centric perspective) that provides a glimpse into family life in Syria that is never seen in the news coverage. The Syrian revolution is obviously part of the backdrop to the story, but it is the growing pains of a young woman dealing with the universal themes of love, sex, family and self-discovery that make this engaging.

Definitely my top pick of the festival. Debut feature from Lukas Dhont, is a coming of age story which follows 15-year-old Lara as she works through the gruelling training regimen of becoming a professional ballerina, made even more challenging as Lara’s feet aren’t unaccustomed to the gruesome pain of dancing on pointe shoes, because until recently Lara danced as a boy. We are introduced to Lara as she begins the long and painful process of hormone treatment and therapy to transition her body to that of a woman. Avoiding the expected tropes of an unsupportive family and out and out bullying, the film provides a glimpse into the fundamental hardship and sadness that is endured from being in a body that is not your own. Masterful debut performance from Victor Polster as Lara, and Arieh Worthalter as Lara’s father, which prompted a 15min+ standing ovation from the audience at the end of the film, which had the actors, director and most of the audience in tears. Netflix have picked this up for distribution, which is hopefully good in terms of reaching lots of viewers but it’s a shame not to see this get a theatrical release on the big screen. I’ll be looking out for the next film by Lukas Dhont.

The marmite film of the competition this year, which completely polarised the audience. Jean-Luc Godard’s film is akin to someone flicking between sixty different television channels, while experimenting with the tracking (if you can remember what that does?!) to distort and discolour the images, whilst listening to a slightly-skipping booming soundtrack on an old record player. It is certainly a visceral experience that one programmer exclaimed “beats you round the head!” … and keeps you wide awake during an 8.30am screening! You can certainly see why it propels some people out of the experience. But if you can be a bit patient, and abandon your striving for meaning and try to let the film wash over you, you can find beauty and questions that will stay with you long after the screening. I think this is one where only time can tell if it is a masterpiece or piece endured for its master. 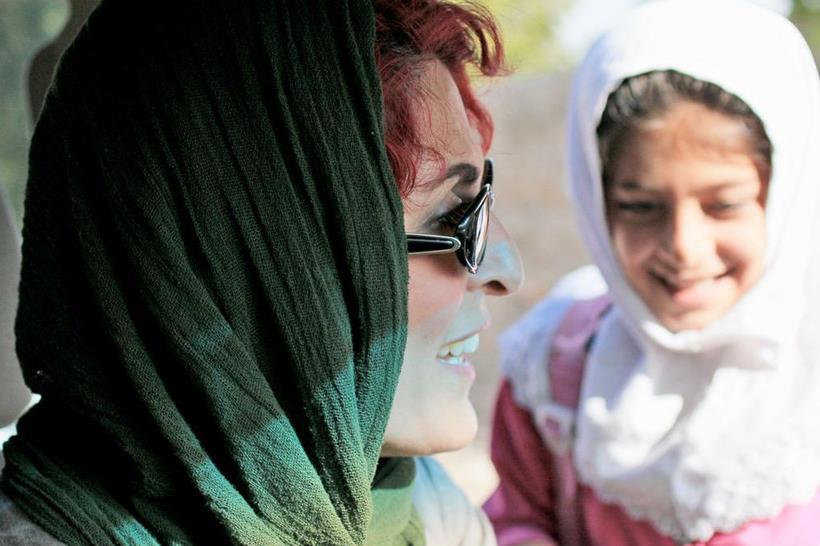 A wonderful capsule of a film, which feels much like a rambling road trip through rural Iran with affable host Jafar Panahi. Behnaz Jafari, famous film and TV actress, is our surrogate self who sets out from Tehran with Mr Panahi to try and find a young girl who sent a video plea for help to the actress, to help appeal to her conservative family to allow her to become an actress. Anxious for the wellbeing of the young girl, the duo set-out on the long car journey to the remote northwest. As we wind through the mountains on country tracks, we encounter local inhabitants of the villages who welcome the travellers with a mix of suspicion and overflowing hospitality, providing a glimpse into life and tradition in these isolated villages. The film provides an interesting commentary on the changing role of women and artists in Iranian society over the past century, and illustrates the complexities of cultures with rich local histories that eschew modernity. 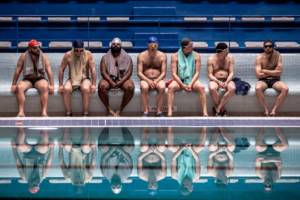 This was the last film I saw at the festival, and it was a great way to end it, a joyously funny French comedy about a men’s synchronised swimming team that conjures up comparisons to The Full Monty (whilst perhaps without the emotional depth) mixed with the entertainment value of something like Pitch Perfect… or perhaps Pitch Perfect 2. Mathieu Amalric is Bertrand, a middle-aged family man who has been signed off from his job on long-term sick leave with depression. Seeking some structure to his anti-depressant-filled days, he joins the local leisure centre’s men’s synchronised swimming team, where he meets an array of similarly unfulfilled, angry, sad, lonely counterparts. Coached by the one-time women’s synchronised swimming champion, who has herself has fallen on hard times, they seek to bring some meaning and value back to their lives by competing for the world championships! A witty script, fun and foolish training montages and energising soundtrack make this the uplifting romp you’d expect. There are a few cultural mismatches with some of the humour, especially around diversity, which a UK audience might find jarring. But it is a well-made foreign language comedy that I’m sure will go down a storm in France and will find an audience in UK cinemas that are looking for a lighter side of world cinema.