Cannes Film Festival provides the ICOs training team with a unique opportunity to network, build our profile and meet up with international partners and funders to discuss current projects and future plans. A one-hour face-to-face discussion is worth a 100 emails as the old proverb goes… 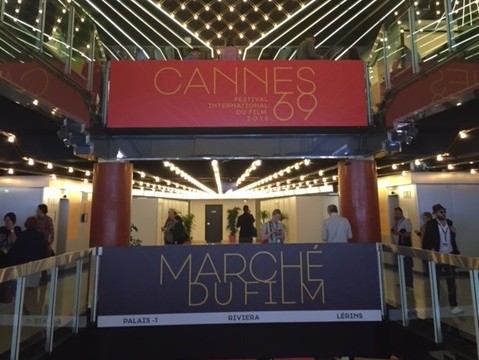 2016 marked my sixth Cannes Film Festival and overall it felt like a fairly sedate affair, with the visible presence of the French military, quieter screenings and parties, and ramped up security checks airport-style (including an unfathomable attempted brioche confiscation). The main reason for the trip was to have several key conversations with international partners about the expansion of our Film Festival Symposium model and the evolution of our Developing Your Film Festival course, both of which are currently funded by Creative Europe. These courses offer a unique professional development opportunity for people working at film festivals, and over the last six years have helped change the sector by training hundreds of film festival personnel. We’ll share more information about new plans in the autumn.

The fact is you really can’t put a value on all the impromptu catch-up conversations you have in Cannes over the space of three days: speaking to our course alumni, colleagues from Creative Europe offices across Europe and other international partners. For me, Cannes is a place where new ideas spark and start to take form.

My favourite film was Almodvar’s Julieta, an absolutely beautiful film which proved to me that Almodvar hasn’t lost his touch.

After 9 years working in various roles in the film industry, it was a pleasure to visit the mecca of all film festivals, the one even your granny has heard of: Cannes. I had certainly developed a curiosity for the festival, hearing stories of long queues, booing in the auditorium, star-studded parties and Uber helicopters!

Our arrival was fairly starry: landing on the Croisette we almost immediately entered a crush of curious tourists and Shia LaBeouf fans clamouring to see the cast of American Honey, who were literally dancing down the red carpet to blaring hip hop. Once we’d dropped our bags at our apartment I went straight out for the evening premiere of The Nice Guys. I queued alone in a long line at the side of the road in my rarely worn high heels, surprised to see men in tuxedos holding signs requesting spare tickets like very classy ticket touts. A man behind me was turned away for not having worn a bow tie and before long I was herded on to a very crowded red carpet, finding myself in a surreal, frenetic haze of flashing camera bulbs and excited chatter – oh and Geena Davis.

Once inside the Palais we watched a live feed from the red carpet and finally the stars of the film arrived to what felt like never-ending applause. As the film began, the audience continued to applaud the festival trailer, the production company, the cast and so on. I was swept along and really enjoyed the spectacle of it all. When the film ended there was no Q&A or words from the cast, just a whole lot more clapping until the cast looked as uncomfortable as possible. I left the auditorium high but dry – sadly no invitation to a yacht-based after party in sight.

The following few days weren’t quite as glamorous but were no less enjoyable. We had some productive meetings with our partners, bumped into colleagues and course alumni from all over Europe, and enjoyed some excellent films, all in a sunny bubble. The best thing I saw was Brazilian film Aquarius which features an astounding performance by Sonia Braga, who’s in almost every scene playing a strong and stubborn former music critic who refuses to leave her family home when developers want to renovate. If you can’t wait for it, check out the director Kleber Mendona Filho’s previous film, NeighbouringSounds, which is almost as good and bears a strong resemblance.

One of my favourite things about festivals is the accessibility for audiences, chance encounters and shared experiences, but Cannes is different – by focusing purely on industry it makes itself very elitist, and for this reason I can see why some will shun it. However, as I learned it’s organisers have every respect for the films and the filmmaking talent and this comes across in their every move. And hey, if you are lucky enough to be able to enjoy the best quality films with the best quality projection while in the French Riviera, maybe its best not to knock it.