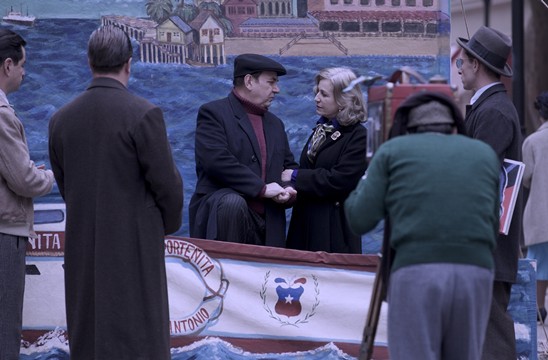 Pablo Larrans Neruda, one of Duncan’s top picks from Cannes

The start of Cannes 2016 felt dominated by the airing of long-gestating controversies. The announcement of the Official Competition lineup was greeted with accusations of over familiarity, with prime position given once again to the auteurist Legion d’honneur: the Dardennes, Olivier Assayas, Bruno Dumont, Ken Loach and Pedro Almodvar to name a handful. Plus ca change might have been the reaction in any other year, but with healthy debates circling the Oscars and other major awards, why should a festival that can make a legitimate claim to defining film culture not be taken to task on what amounts to greatness, who gets to speak and why?

With the robust and aspirational report prepared by Directors UK and Stephen Follows on the shocking lack of female directors in UK feature filmmaking in mind, I was glad to have the chance to see two of the slim number of titles directed by women at Cannes. Neither Money Monster (directed by Jodie Foster and playing Out of Competition) nor In Bed with Victoria (the opening film for Critics Week, directed by Justine Triet) proved irrefutable evidence against naysayers of the need for a quota system. Yet they were both films that succeeded and failed by their own merits, just like any others debuting on the Riviera; the chance to have the same creative opportunities is whats really at stake.

My approach in trying to select from the bewildering array of options is a high risk, high reward game of eschewing what is likely to receive a UK release (adieu then Monsieur Loach and Mademoiselle Arnold, and see you in London) and hoping to find a new favourite filmmaker. As ever with Cannes, you feel as though you missed some of the best films regardless of how many great ones you end up feasting upon (I’m eagerly anticipating the release of Toni Erdmann and Train to Busan’s sale this side of the pond!), but here’s three that I thought stood out.

Kirill Serebrennikov’s The Student (or as its much more evocative Frenchtitle has it, Le Disciple) which screened in Un Certain Regard, is a Russian story of youth in revolt. Venya (Pyotr Skvortsov) is not driven off the tracks by drugs or sex, as his mother suspects, but by evangelical fervour. Endlessly quoting Bible passages, denouncing evolution, gay rights and the moral turpitude of the bikini, he’s a superbly brooding figure of motiveless malignancy. It’s an intense, claustrophobic film. We’re trapped for the duration with the unswerving certainty of Venya, as he’s both attacked by his Jewish-born atheist biology teacher and abetted by school authorities who tacitly endorse his extreme views.

Although adapted from a stage play, the best scenes in the film have an intensity that carries over from these origins and ties them to visuals that make the most of the films strong symbolism. Audiences who were willing to take the trip with Ukraine’s The Tribe or Leviathan will enjoy this films blackly comic mix of teenage angst and pointed satire.

Pablo Larran’s latest was by far the safest bet I made in my viewing choices during my stay in Cannes. His No and The Club are highlights of the last decade, both formally compelling and morally probing. Neruda,his would-be biopic of the Chilean poet-politician, is no exception and sees him return to a national scale canvas after the brilliantly uncomfortable chamber piece The Club.

Larran was never likely to make a conventional biopic,carving lapidary truths and cementing pivotal moments with reassuring aesthetics. Instead, this is a brilliantly ambiguous, insidious portrait of an often venal and hypocritical figure. Larran’s skill is to draw him as someone who nevertheless simultaneously deserves his heroic status as a vital figure in Chile’s struggle.

1948: Pablo Neruda finds himself on the wrong side of an anti-communist drive and is forced into hiding. The details of this exile are delivered in heavy narration by Gael Garca Bernal. Bernal is brilliant as a detective who is part-antagonist, part-acolyte, for Luis Gnecco’s Pablo Neruda.Both actors bring considerable charm to their mutual pursuit, a beautifully shot dance in which its uncertain who is chasing whom.

Its an incredibly satisfying film, and its gratifying to see a director with this breadth and scale of talents using them in a sustained, light and morally ambivalent way, rather than equating epic scale with certainty and pomp. The final scenes, played against the jaw-dropping scenery of the snowy Andes, are equal parts answer and question to the searching questions asked by Larran throughout. Here’s hoping that audiences scared by The Clubs grim subject will embrace this when Network release it across the channel.

The approach of the seventh feature by director Joachim Lafosse would have been appropriate for a first time filmmaker. Confined almost entirely to one location and with a small handful of characters, its the sort of small canvas filmmaking that makes a boon of economic necessity. But it’s unlikely you’d find a newcomer able to draw out the specifics of this intimate story with the skill and ambiguity that L’afosse demonstrates here.

Marie (Bernice Bejo) and Boris (Cedric Khan) are a couple in a vicious cycle of confinement: they seemingly both want their relationship to end, but are forced by finances to remain in the same (gallingly beautiful) flat that they have shared for the last fifteen years, along with their twin daughters. Plot-wise, its nothing more than a sketch, but After Loves scene-by-scene attention to detail is where its genius plays out. There’s a central dinner party scene that is as excruciating as it is realistic; a wonderful microcosm of the simmering mix of love and hate that has kept this couple in the relationship holding pattern they find themselves in.

Rarely has a film shown so well the way that money matters become a proxy for emotional battles, but its also the rare art house film that shows that finance is a cause of friction in and of itself. We’re used to seeing excess and poverty on screen, but After Love is proof that small-scale money troubles have their own drama when handled with this level of studied intimacy. Audiences that were willing to take the journey of Two Days, One Night or Measure of a Man will find this a refreshingly genuine depiction of scenes from a marriage.