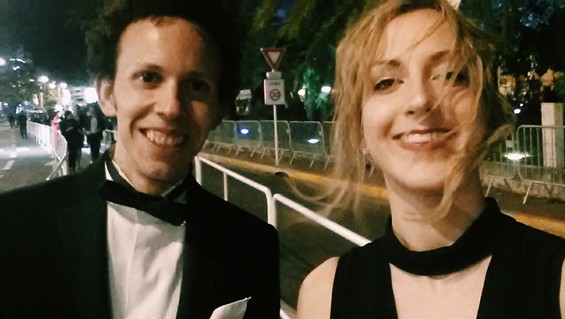 Our FEDS trainees – 15 ambitious young people receiving experience in distribution, exhibition and international sales – are moving ahead with their careers. Here, Emma Caviezel gives her take on her first time in Cannes.

As soon as I started my FEDS work placement at Umedia International in late January, it became clear that festivals were a major part of the sales agency calendar. Some of the first tasks I was assigned were to do with the imminent Berlinale, and, having spent some of my first working days in an almost empty office as my colleagues left for Germany, I was pretty curious as to what the whole festival thing was really about. When it came to Cannes, a bittersweet series of events led to me being transferred a badge, and I made my way over with the aim of spending some time working in the office, as well a shaving a general look around.

Arriving at the office, I knew the sales team would be extremely busy, having spent the weeks leading up to the festival booking their meetings. By the time I came in over the weekend, it was only just beginning to wind down, as the majority of activity took place in the first few days. Basically, the aim of the sales team is to sell the rights of the films on their slate to distributors representing different countries or regions. At this particular festival, their focus was on a few major projects, all at different, but early, stages of production. The team there were very generous with inviting me to sit in on meetings, and I was really impressed by the matter-of-fact and honest way in which the projects were pitched and discussed,both parties being very up-front about their hopes and visions for the finished film. Although the agents calendars were completely booked up, what I had pictured as a hectic and stressful environment seemed much the opposite. Each new distributor, whether arriving in groups or individually, was greeted with new energy, and with a selection tailored to their company’s, or regions/tastes. During the latter part of the market, meetings were also had with producers, with a view to discussing new upcoming projects that the sales agents may be interested in picking up.

Otherwise, my stay in Cannes revolved mainly around screenings. Having unexpectedly received red carpet tickets on the afternoon before leaving, I had my first Grand Palais experience on the night of my arrival to see Yorgos Lanthimos’ The Lobster. The buzz for the film had been building up all day, with an earlier screening in the morning. By mid-afternoon, the whole Croisette was crawling with tuxes, shades and sparkles, people milling around waiting for the screening, but also hopefully waving handmade signs asking for any extra tickets. On the way to the carpet, laid out on the Palais steps, you go through a gate, then another, and then another, to the sound of blaring music and cameras flashing from absolutely everywhere. It all culminates in the entrance of the cast and director into the cinema to thundering applause, with the anticipation for the movie at an absolute high. The whole thing was simply surreal.

In addition to this surreal quality, what mostly struck me about Cannes was the contrast between it being extremely exclusive on the one hand, but also more accessible than I had thought. Before leaving, I’d been variously warned that there might not be a point in even going because of its shallow and selective side – and that side was definitely very real, as I saw the controversial ‘heelgate’ policy enforced at the screening of Todd Haynes Carol. However, since so many were there for networking purposes, people were generally quite open and inviting. And although I was lucky in terms of screenings at the Palais, my favourite film at the festival was Arnaud Desplechin’s Trois Souvenirs de Ma Jeunesse (My Golden Days), which was screened at the Directors Fortnight (Quinzaine des realisateurs), a series of screenings open to industry and the general public alike. If you don’t have a badge, individual tickets are £7, although you do have to queue up about an hour in advance, as even with a ticket you’re not guaranteed a place.

Being in Cannes proved an invaluable opportunity to see some amazing films, as well as to learn more about the sales process through sitting in on meetings at Umedia. However, it was not without relief that I got on the plane back to the real world, as I definitely had my fill of glitz, glamour and blisters.