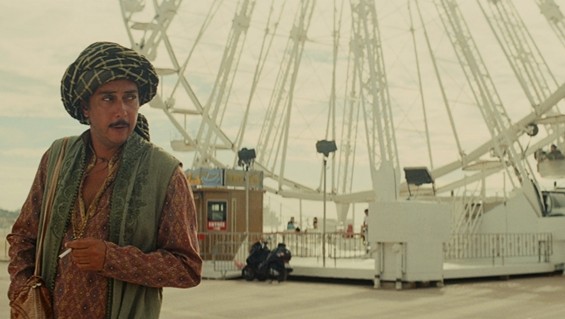 Miguel Gomes’ Arabian Nights, one of many titles receiving serious attention in Cannes 2015

Before attending Cannes this year, I canvassed the Independent Cinema Office veterans – some with over two decades of Cannes experience under their belts – about their tips. Wear sunscreen AND bring an umbrella; plan your screenings; see the smaller titles, was the consensus. I’d had my years of Cannes envy, reading reports and gossip from the sidelines. So what did I, a Cannes ingenue, learn in my five days on the Croisette?

1. It’s all about the films

Every year at Cannes, the debate rumbles on about the sideshows of the red carpet and gossip, but despite its prominence in press coverage, it really isn’t a significant part of the event for most attendees. Instead, its an opportunity to watch material you wouldn’t see otherwise, in one of the most receptive environments in the world. Anyone who spends their life exhorting general audiences to broaden their experience of film can only find the mood of Cannes infectious. There’s not many other places where a 6-hour epic of surrealist social commentary on modern-day Portugal is a must-see hot ticket, and that’s a good thing (even when it means you’re left out in the midday sun having failed to make the cut!).

One thing about gathering together this many film industry people together in one place is the realisation that you are one of a million parallel people performing the same task around the world. This has two upshots. Firstly, it’s a real pleasure: you can start talking to anyone, anywhere and you will have two things in common immediately to talk about: film in general, and what you’ve seen at the festival. You’re finally in the company of people who will catch your hyper-specific filmic references, rather than standing awkwardly on the edge of a conversation about football (that supposed universal male subject). On the other hand, you realise that you’re a tiny atom of importance in the film business among the thousands of others. Sure, you can look down your nose at the very few who have passes more lowly than you, but there’s so many more people above you, that its a daily lesson in checking your swagger. That said, it’s probably salutary for an industry that coined the phrase ‘Don’t you know who I am?’ to be told once a year, with that uniquely French hauteur, ‘Mais, non.’

With all the talk of overcrowding in UK distribution (with 20 plus releases in some weeks this year), it’s a shock to be confronted with how narrow a selection of moving image actually gains a release of any kind in the UK. In the official selection strands, a large proportion won’t receive distribution even by specialists in small release. The rubric for these decisions is not always aligned with their relative quality, but often more mercenary concerns. Of course, this is a vindication of the health of the festival that many of these films will only have notoriety within a festival context. Even the official competition is only a small selection of the films vying for attention in the March screenings, and those looking for production funding on the Croisette. It’s fairly dizzying, but it does make a strong case for the importance of a thoughtful distribution strategy: with so much on offer, only those with a highly targeted approach are going to have an impact in the wider world.

4. No judgements, no labels

One of the real treats about going to a festival like Cannes, where almost all the titles have their world premiere, is that they haven’t had the pre-digestion that comes with reviews, marketing and distribution strategies. Sometimes you’ll jump into a screening not knowing who the director or title is, merely that you have a window to walk to the theatre and enough time to queue. This can yield some uneven results. One film I selected by chance, Two Friends, Louis Garrel’s directorial debut, didn’t hit the mark for me, feeling like a flat-footed Jules et Jim-retread, rather than the amour fou romance I had hoped for. That said, it also gives you the opportunity to let the unexpected creep up on you. One film that really surprised me was Iceland’s Grimur Hakonarson’s Rams, a desolately beautiful story about two estranged brothers and their blackly comic attempts to preserve their lineage of sheep against heavy odds. Saying this as someone whose job in marketing is to neatly situate films along recognisable lines, it’s a real pleasure to have a films tone and direction creep up on you, unexpectedly. It also makes you realise how frequently we gloss over films due to negative critical reaction. Having caught Mawenn’s Mon Roi at an early morning screening and really enjoyed its study of an on/off marriage (Vincent Cassel bringing enough charisma to sell the ambivalent attraction of a narcissitic husband), I was very surprised to see some sniffier reviews from UK outlets. It’s certainly made me consider my knee-jerk decision to give certain films a wide-berth in week of release after sniffy reviews. That said, there are some films where my own opinion and critics were in lock-step for…

5. It’s both more and less glamorous than you think

Tensions flared this year about the militant approach to encouraging red carpet glamour when flat shoes were banned from the red carpet (for women at least), and with one ICO staffer upbraided for donning Birkenstock’s even off the red carpet. Its slightly funny to see this approach given the broader context of the festival. Certainly, you will see people who have primped and preened – it’s still the Riviera after all. And I have seen some genuinely stylish people (I saw a medical sling that was more fashion forward than anything I’d see in a month in London). But even the most ardent fashionista cannot maintain their grace in the face of multiple two hour queues, and a more rational approach to style is evident in long-standing attendees. Dressing in layers, comfortable shoes and hasty hygiene are in evidence (perhaps speaking only of myself here!).

So that was my first Cannes: an absolute treat from start to finish. I was bounced for my one must-see film – Carol – after a two hour-plus wait in the baking sun; I made a lot of new friends; I fell off my chair in the Old Town and I saw a lot of films. Here’s to another year!