Day three of my Cannes festival experience, day five of the actual festival. I’m hoping to have a full day of film watching today, as it will be my last opportunity. Tomorrow I’ll be meeting with the IFP Festival Forum,and attending the European Film Forum on connecting European films to a global audience.

First up is Competition hopeful Mon Roi by Mawenn. General consensus amid my fellow Cannes colleagues is one of indifference, so I enter the Grand Theatre Lumiere with my expectations soundly in check. I’m more than pleasantly surprised. We meet Tony (Emmanuelle Bercot) in a rehabilitation centre after a suffering a serious knee injury during asking accident, where shes struggling with her incapacitation. Whilst in rehab, Tony looks back over the tempestuous relationship she has shared with Georgio (Vincent Cassel) for the past ten years. Swept along with Tony through the highs, lows and extreme lows of her passionate relationship, I find myself internally screaming at the screen for her to leave this destructive and suffocating mess, whilst in the next scene being charmed once again by the charismatic and funny Georgio…Je suis Tony! A marvellous portrait of a passion-fuelled relationship that seems inevitable, inescapable and redundant all at the same time. With marvellous performances from Bercot, Cassel and droll script from Mawenn and Etienne Comar, its no surprise that the film has been sold to most territories around the world. Distributed in the UK by StudioCanal, a perfect partner.

I’m really keen to see some films from the Cannes sidebars, Critics’ Week and Directors’ Fortnight,which is where you can usually find some innovative titles that haven’t been picked up for distribution yet. So my colleague Duncan and I hot foot it to the other end of the Croisette to see if we’re in time to beat the queues. We decide on a divide and conquer strategy, so he takes Directors Fortnight, and I join the queue for Degrade, a Palestinian film by Arab and Tarzan Nasser. The directors offer an impassioned introduction to the film, explaining their aim is to portray the day-to-day life of people living in the Gaza Strip, offering an alternate view to the death and destruction that saturates the news coverage. Set in Christine’s beauty salon, twelve women wait in the baking heat for their turn to be plucked, polished and preened, before the erratic electricity supply runs out. When a gun fight breaks out in the street and the salon is locked down, tensions in the salon reach boiling point. An interesting insight into the lives of twelve very different female characters living in contemporary Palestine, and the daily realities of life in the Gaza strip: a struggling utilities infrastructure, poor access to medical care, and a pervasive threat of violence. The film leaves me with a hunger to find out more about the real-life experiences of women in Gaza.

Emerging disorientated from the dark, cool air-conditioned auditorium and life in Gaza, to the blinding sunshine and abundance of the Cote d’Azur, I’m straight back in the queue for the next offering in Critics’ Week, Coin Locker Girl. A South Korean film by Han Jun-hee, about a new-born baby, abandoned in a locker in a subway station, found by a homeless man, and then sold by a corrupt police officer to the head of Mom’s brutal crime family in Chinatown. At the age of four, Il-Young learns that the only way to survive in Mom’s family is to become useful. Having survived practically on her own since birth, Il-Young’s survival skills make her a perfect enforcer for Mom’s illegal debt collection service.  However, when Il Young is sent to collect a debt from a young student, she encounters something she has never come across before: kindness. A fantastic genre piece from Han Jun-hee with magnificent performances from the two female leads, Kim Ko-eun and Kim Hye-soo, xploring the role and identity of women and the notions of family.

Feeling energised from my morning film viewing, and entirely too coddled (I’d never make it as a self-reliant debt enforcer on the streets of South Korean Chinatown), I head to the Palais to try and catch Maryland (Disorder) by Alice Winocour.  There has been lots of buzz about this title, and I’m a big fan of Matthias Schoenaert’s past portrayals of masculinity (Rust and Bone, Bullhead) so I’m very excited to see this one. 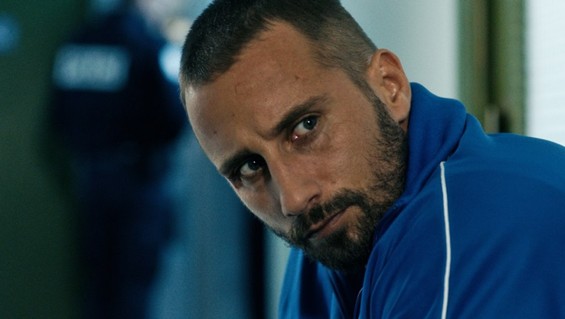 Vincent (Matthias Schoenaerts), a Special Forces soldier back from Afghanistan, is suffering from post-traumatic stress disorder. Whilst on leave from the army he gets a job working as private security, tasked with protecting Jessie (Diane Kruger), the wife of a rich Lebanese businessman at their luxurious villa Maryland. Quite experimental in style at the beginning of the film, Winocour uses pervasive sound effects to disorientate the viewer and give a glimpse into the mind of the traumatised Vincent. Slow-paced dream-like scenes, punctured with an invasive techno soundtrack, mirror Vincent’s confusion, so were unaware whether he is suffering from paranoid hallucinations or whether there is a real threat to Jessie and her family. As the film unfolds, the pace and tension build to palpable levels and were driven from our dreamlike state into thrilling consciousness.

With four films under my belt, and evening well underway, its time to head to the Old Town for dinner with the ICO team,and a catch up on the day’s film watching.

My last day at the festival, and I’ll only be able to fit in one film in this morning, so I go for the Croatian film Zvizdan (The High Sun) by Dalibor Matanic. Having formed a lasting friendship with Motovun Film Festival in Croatia through our partnership on Developing Your Film Festival, I’m really keen to see some Croatian cinema. I’ve only ever seen a couple of Croatian films, and only during my visits to Croatia. In the ten years that I’ve worked for the ICO I cant think of any Croatian films being released in the UK, so I’m really interested to see or hear some new voices/stories. And I’m not disappointed! Zvizdan is split into three stories, each with the same set of actors, playing different characters over three consecutive decades: 1991, 2001 and 2011. The first story is of Jelena and Ivan, who have grown up as childhood friends in neighbouring villages, but as ethnic tensions between the Croatian Serb and Croat villages intensify, their burgeoning love becomes forbidden. The second story of Natasa and Ante, takes place in the early aftermath of the post-war era, where Croatian Serbs and Croats are returning to their homes to live side-by-side with their once neighbours again, but can love overcome the past ten years of hatred, killing and guilt? Finally, in 2011 with a new generation of Croatians trying to rebuild their country and move on from the tensions of the past, can the love of Marija and Luka finally win out?  A heart-rending depiction of the enduring strength of love, with outstanding tear-inducing performances (again, again and again) from the two lead actors Tihana Lazovic and Goran Markovic. And on that high note my film-watching festival experience comes to an end.