Founded by editors Dr. June Givanni and Gaylene Gould, the Black Film Bulletin was first published at the BFI in 1993. An essential space for critical commentary around developments in new Black cinema and Pan African Cinema histories, celebrating the dynamism and creativity unfolding in film across the African Diaspora, the BFB documented a significant renaissance moment in Black filmmaking culture and operated as an incredibly valuable national and international community hub.

Publication ceased around the turn of the millennium, but now the Black Film Bulletin is coming back. ICO Director Catharine Des Forges spoke to its co-founder June Givanni, Curator and Director of June Givanni Pan African Cinema Archive; Melanie Hoyes, Industry Inclusion Executive at BFI and Jan Asante, Curator at Think Cinematic for part three (see part one and part two) of an extended conversation about the role of the BFB now, the effects of the pandemic on the industry and how they are looking ahead.

Catharine Des Forges: We’ve just published a whole series of articles on our blog (the ‘Manifesto’ series) that offer a future vision for exhibition coming out of the pandemic. Most of us would like some, or a lot of things to change in the future of the independent cinema sector. What would you like to see?

Jan Asante: I think what the closure of cinema chains attests to is that they’ve really been held hostage by tentpoles – you know, cinemas closing because the new Bond withdraws – and it’s such a tragedy while there’s so many collectives working to bring this really valuable work, contemporary and older work, to the audience. I think it would be great if that culture was re-evaluated to show the true value of independent filmmaking and the independent collectives bringing those stories to light. That’s what I would like to see come of this pandemic crisis.

“It can be such an isolating industry, it can really make you feel like you’re working in a silo – we really hope the BFB will give people a way to feel connected and able to insert themselves into different conversations that will be beneficial to their craft.”

Melanie Hoyes: I think it’s been a really interesting time because what it’s shown us is how quickly you can change things up. All these old excuses – ‘oh it’s just so difficult to make change or do things differently, we’re all so used to doing things this way’ – what this time has shown us is how quickly you can change things if you really want to, that actually it’s about prioritising change, and I think it’s a real chance to restart, to do things in a different way and not go back to the old way. So it just feels like a real opportunity if people want to take it. For me, the power of cinema, particularly independent cinema, is to be able to rewrite the canon and sort of dismantle what we understand cinema to be – and, cinema and the canon written by who? – and really kind of dismantle that. I think what’s really exciting about this time is that there is that interest in rethinking things. We’re having conversations in the archive that I never thought were possible; I think the realisation that we can no longer do things the old way in order to be relevant and contemporary is starting to dawn. And I think independent cinemas have the ability to be a part of that conversation, to curate that knowledge and pass it on, to discover things and put pressure on the archives to make things available to them, so that’s what’s exciting to me. 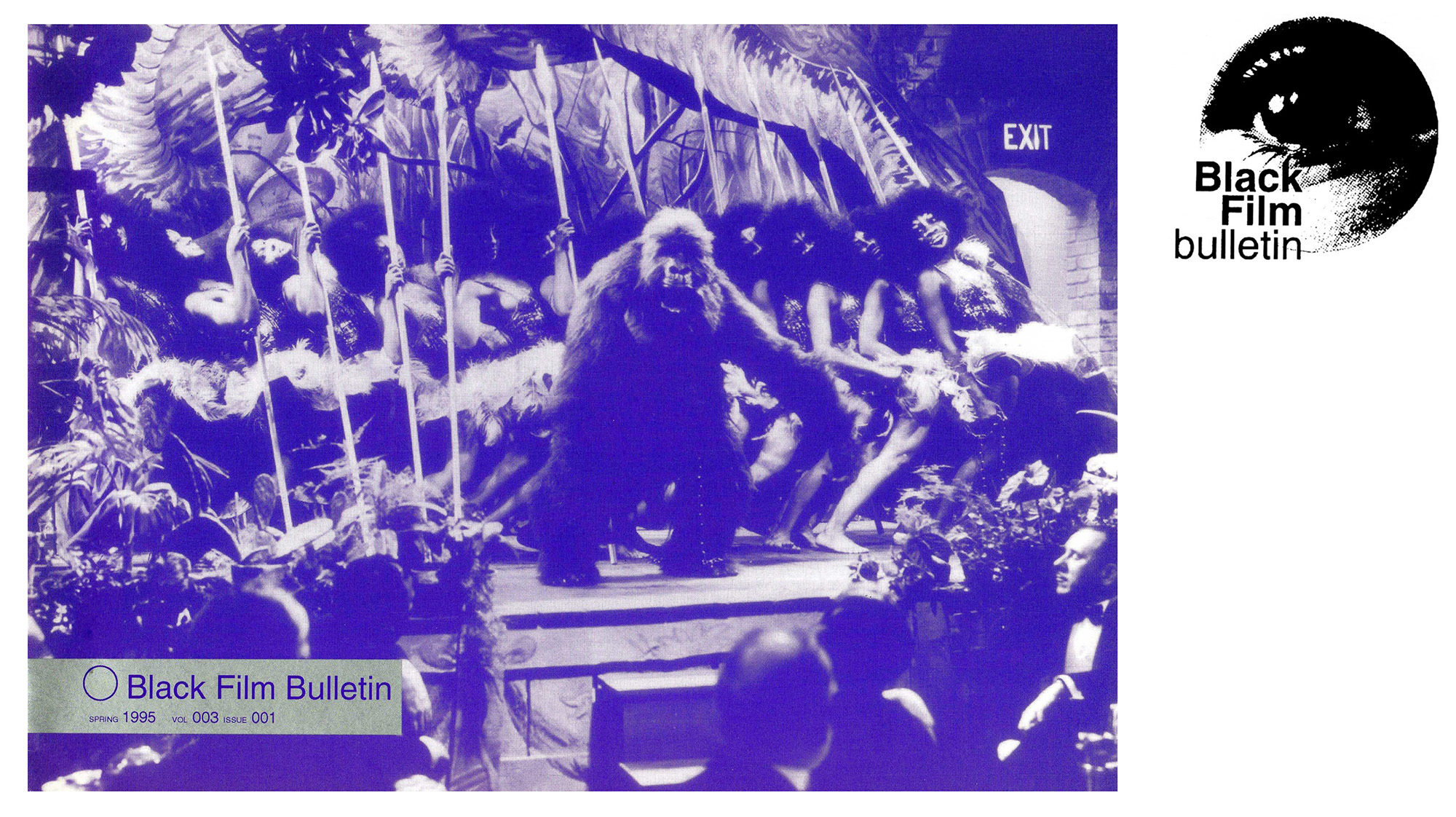 June Givanni: It’s also, how do you drive people to the resources – because I’m not sure how many people know that they exist – and about making connections across different sectors. We Are Parable came to us for materials for an exhibition that they’re running, and I know they want to talk to us [the June Givanni Pan African Cinema Archive] about our holdings for their ongoing programming. They are working through the BFI to an extent but I think what is interesting is when people can have one foot in and one foot out of an institution, as it were. In addition, it can be that those who are firmly based within the institution, like Mel, are great allies to work with and can be a kind of link – both to give the institution an idea about what is happening on the outside and to help provide access to the institution for those outside it. I think those connections across the sector, and between the sector and the institutions, are ways in which that work can happen, and needs to happen.

CDF: That’s a great point, it’s really important to have people inside as well as outside of institutions to forge links, although of course you can’t put that responsibility on any one individual.

“I hope that this period and the response to this period will really be a testament to the fact that Blackness is never seasonal, that there is always an interest and always will be.”

JG: As someone who curates, I think it’s not only about connecting with film institutions but also with museums, the theatre and music sectors, all of the areas in which Black creativity exists in an important way, so they are all linked. I think that a film sector looking at audiences, at new talent, at what needs to happen – especially in terms of Black film – needs to make and nurture those connections. Of course, that also gives you the opportunity to link audiences. Historically, Black film and creativity have always worked across a range of art sectors and genres; they feed each other. I think that is still true to some extent, and so when you’re looking at possibilities for creating and identifying talent, and also how you reach audiences, you need to approach that in the same way, because both artists and audiences move between forms. Film institutions need to work much more closely with theatre, music, galleries, museums, which are now all going through the same process of mea culpa and looking at why they have got to 2020, with all of its challenges, and are having to reexamine their navel and realise things. And in that realisation they need to also look at how other art forms work. I think it’s a good approach for curators and audiences as well, because they do cross over a lot.

JA: Can I add something on audiences and what I hope this pandemic epiphany will yield? From the experience of a person who programmes films and has done so in commercial spaces, I hope the myth of there not being an audience for work about Black lives on screen will be refuted, because it is demonstrably untrue and has been a huge hindrance. I’ve had the experience of programming in places and being given the smaller space because it’s assumed there’s not enough interest in this particular theme simply because Black faces are at the fore of it. I hope that this period and the response to this period will really be a testament to the fact that Blackness is never seasonal, that there is always an interest and always will be.

MH: It can be such an isolating industry, it can really make you feel like you’re working in a silo – we really hope the BFB will give people a way to feel connected and able to insert themselves into different conversations that will be beneficial to their craft. We’ve always known there is a need for this space, it’s just how it’s constituted and how we sustain it.

“What this time has shown us is how quickly you can change things if you really want to, that actually it’s about prioritising change, and I think it’s a real chance to restart, to do things in a different way and not go back to the old way. It just feels like a real opportunity if people want to take it.”

CDF: If people are interested in writing for you, should they get in touch?

JA: Yes. If anyone has a pitch, or wants more information, please email us at blackfilmbulletin@gmail.com. The website is blackfilmbulletin.com and the first back issues are now up. We’re also on Instagram and Facebook. BFB will manifest into events too, we’re looking at how that will work post-pandemic. Also, in the midst of the pandemic, Birkbeck and the Peltz Gallery commissioned June and myself to make a video essay about the BFB, an abridged history of how it came about that highlights some key contributors, and that’s available on YouTube now.

This blog post is the final one in an extended, three-part series in conversation with June Givanni, Curator and Director of June Givanni Pan African Cinema Archive; Melanie Hoyes, Industry Inclusion Executive at BFI and Jan Asante, Curator at Think Cinematic. Read part one and part two.