How do we make a new film industry powered by great ideas that everyone can participate in, regardless of background? The BFI Future Film Festival is here to answer that question and inspire those who are going to shape it. Freelance journalist and aspiring filmmaker Eve Jones attended the 2018 event this February and talks about what got her excited to start her fimmaking journey.

The international film industry is undergoing a tectonic and historical cultural shift. Movements such as #oscarssowhite, #metoo and the Time’s Up campaign have catalysed a repudiation of the phallocentric, white and heteronormative cinematic culture that has been the standard in Hollywood since its inception. The overwhelming critical praise for low budget, unconventional narratives such as Get Out, Lady Bird, Moonlight and Call Me By Your Name are great symbols of this change. However, a permanent transformation of Hollywood’s landscape requires a prolonged effort and a sincere investment in the next generation of diverse filmmakers. If we want to create sustained change within the industry we love, events such as the BFI Future Film Festival – an event created to support the UK’s young, emerging filmmakers – are invaluable.

I attended the 11th annual BFI Future Film Festival in February. I travelled to London for the event hoping to be inspired and informed about how to start moving from my current profession, journalism, into screenwriting and directing (these were definitely the most common career aspirations amongst attendees). As someone who has never written a script, let alone made a short film, I was anxious that I’d be out of my depth; but the programme and speakers facilitated every level of film experience.

At £40 a ticket or £12 a day, I was also attracted to the event because of its relative affordability. For an age group with the lowest disposable incomes (22% lower than the UK average), it is baffling just how many youth initiatives fail to recognise the importance of cost to our decision making around whether or not to attend events. Furthermore, this is not just an age issue but one of class: how can we expect to see more working class narratives in film when cinema ticket prices have skyrocketed by 48.25% in a decade (averages across the UK increased from £4.87 in 2006 to £7.17 in 2015)? Fortunately, the BFI’s government subsidies enable it to offer a cheaper than average ticket, making the main attendance criteria a love of film rather than a sizeable income.

This love was palpable in BFI Southbank (the venue itself brimming with stimulation) and highlighted in the tireless discussions and debates throughout the weekend. I arrived alone but once surrounded by other cinephiles, it was easy to form friendships. This was made even easier by the daily networking drinks! I left with lots of contact details, a like-minded crew of filmmakers and a new energy to create.

The programme was curated to be both stimulating and pragmatic with workshops such as ‘How To Make Money and Get By’, ‘Finding Your Film Crew’ and ‘Going Further with Your Grad Film’, refreshingly acknowledging the realities of an industry that rarely leads to financial stability. In this sense, it did not romanticise the industry. Nevertheless, Thursday’s keynote speaker, Producer Loran Dunn, assured us that ‘there is room for all of you in this industry’.

There is fear in the industry that the largest cinema-going audience of 15-24 year olds (29%) is not interested in engaging with independent cinema, an idea refuted by the carefully curated film programme of low-budget feminist features such as Born In Flames and I Am Not a Witch and an array of intersectional shorts by the young Future Film Programmers. The idea that young people are turning to subscription sites because they don’t enjoy the cinema experience is antiquated. It is (secondary to price) a programming issue. Sites such as Netflix, Hulu and Amazon Prime attract younger audiences because they programme diversely and with social consciousness; currencies increasingly valued in modern filmmaking. This was seen at the festival across all the short film categories: The Law of the Sea animated Greek fishermen’s perspectives of the migrant crisis, experimental short Dead. Tissue. Love. explored necrophilia stigma and Beneath the Surface, winner of the BFI Patrons New Talent Award, tackled racial microaggression.

The festival provided over 45 varied workshops across the four days, allowing attendees to cultivate their existing interests but also transcend the disciplines they were comfortable with. Friday’s sessions ‘Cut to the Rhythm: The Art of the Music Video’ and ‘Audio Storytelling’ blew my cinematic mind despite my primary pursuit being feature film. In both symposiums, the speakers’ commitment to their chosen medium was tangible. The workshops were practically as well as visually inspiring, with speakers who made our aspirations seem all the more possible. For the same reason, I was excited to see the all-female coterie of keynote speakers and a number of speakers from minority backgrounds. It is so much easier to imagine yourself in a role if you can see people like you already in that position. Diverse speakers at events like this are essential for increasing diversity in the cinematic workforce.

One idea reiterated by many of these speakers was that truth is the most fundamental element of impactful film. Friday’s keynote speaker, script editor Kate Leys insisted that ‘even a small truth is rare and significant’, while comedy writer Ian Robertson encouraged the audience to write our fears in the ‘Funny Ha Ha: Writing for Comedy’ session, his own work pushing characters to their breaking point to illuminate their foibles. In her ‘Character Building’ session, Gabriella Apicella suggested that characters must be born from ‘empathy, compassion and truth’. Each speaker noted that audiences want to see truth and can recognise its dissimulation. This resonated with me – we all have the resources to create brilliant stories, with our individual experiences waiting to be tapped, and a key factor for success is our willingness to share those truths.

Equally, the humility of speakers was liberating, with many of them reassuring us that great film is accomplished not just through natural ability, but with prolific and flexible creativity. Start creating now and create a lot, because a large portion of what you initially make will be substandard. Be flexible with your ideas because your work will transmogrify in unpredictable ways throughout production, but if you lean in to that and engage with the changes, you will produce something that you’ll remain proud of.

More than one funding panellist begged us attendees to stop pitching Black Mirror-esque stories (there goes my best script). Though they were very much literally describing the saturation of the industry with technologically dystopian film, Gabriella Apicella elaborated: ‘there is too much concept-driven work at the moment’. Concept is just one dimension of successful films; the power of a film may rather stem from character (Moonlight, Rocky, Suffragette) or plot (The Godfather, Spotlight, Indiana Jones). It is easy to get swept along with filmmaking trends, but ultimately it is always the trendsetters – rather than followers – who pave the future for film.

Eve Jones is a freelance journalist, cinephile and feminist. She lives and works in Plymouth’s coffee shops. 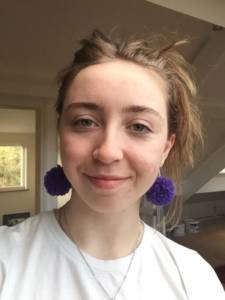