My main purpose for going to Berlin is to spread the good word about our Developing Your Film Festival course (did I mention we’ve just launched the 2013 edition?) but there is a big added bonus of watching some films while I’m here. This will be my very first Berlinale, actually my very first time in Berlin or Germany, so I’m a complete novice. 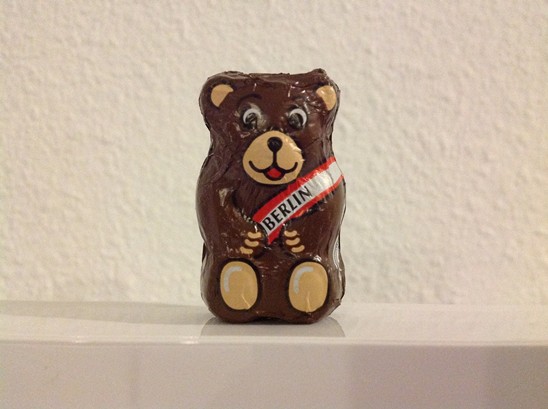 Looking out of the plane window as we’re landing, I see the city is covered in a thin blanket of white snow. The kind gent at the Tegel airport info desk stuffs lots of annotated maps into my hand sells me a magic pass travel card and directs me to the X9 bus that will take me into the city centre.

I’m really itching to pick up my badge and programme so I head straight for Potsdamer Platz, Berlinale’s hub spot and best place to start, so I’ve been told. A glance at my festival map and the buzz of people outside a big building tells me this is the place I’m looking for. But after I circumnavigate my big suitcase through the throngs of smokers outside doing business, squeeze it through the revolving doors and drag it up an elaborate staircase, a clearly unimpressed but very polite official informs me this is the European Festivals Market and sends me round the corner to a very quiet accreditation pick up.

My badge is a glorious, if somewhat lowly, industry pass and will only get me into a handful of programme screenings on its own, but I’m told I can get tickets a day in advance from the Service Centre or take a chance on queuing at the screening venue. I get the feeling that successfully seeing the films that particularly tickle my interest will take plenty of planning, some luck and cunning.

I do a round trip via my hotel in Tiergarten to drop off bags and have a quick change then off to a MEDIA drinks reception at the fancy Ritz Carlton, where I gain film market insights from some friendly Northern Irish producers (apparently it’s much easier to do meetings here than at Cannes) and enjoy fiddling with the film-stock table decorations.

Maddy from Watershed also meets me here and kindly walks me to the nearby Cinestar, where I hope to catch a late showing of a Japanese film, Kujira no machi (The Town of Whales). I have a solo counter top dinner at “Billy Wilder’s” cocktail bar, a bit naff, but, being a big Wilder fan, I’m a little bit thrilled.

I don’t have tickets for Kujira no machi but luckily there are plenty of seats left so I can go in. The film, by female first-time feature director Keiko Tsuruoka follows three companions – two girls and a boy in their late teens – who take a trip from their rural village to Tokyo in search of one of the girl’s (Machi) missing brother. What starts off as an awkward cliched love triangle begins to turn into something more interesting as their emotional insecurities challenge their friendships and impact the style of the film. As Machi’s inner turmoil bubbles to the surface, the film is punctuated with horror-like shots, as if she something off camera or someone will jump out at her at any moment. Although disruptive against its dramatic grounding, these unnerving moments do add an intrigue to this post tsunami work, as does the saturated light, water imagery and children’s ditty sung by the protagonists about constellations. Overall, it was easy to spot that this was a film school thesis project, albeit a rather successful one.