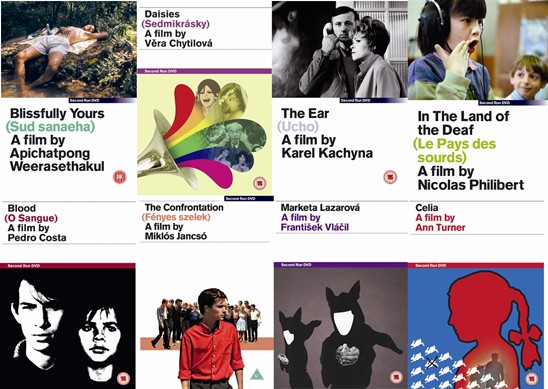 This Friday sees the first theatrical release from one of the UK’s best DVD labels, Second Run. Horse Money is the latest film from Portugal s Pedro Costa, lauded at festivals worldwide for its amazing use of light and deep dive into the world of Ventura, a Cape Verdean living in Lisbon. We sat down with Mehelli Modi to talk about what makes a Second Run film, refusing to eat unless shown cinema and what films hes been proudest to be part of.

Did you always have an interest in film?
My father and my mother were both in filmmaking. Almost from the time I was born I remember the bits of 35mm film lying everywhere. I’m told when I was two years old I would never eat my food unless I had a film to watch. It was part of my DNA when I was growing up. Televisions and cinemas would show amazing films when we would travel. They would have seasons of Bresson and Antonioni. All that has disappeared now. All of that taught me about people and cultures.

I came to England to do my chartered accountancy and eventually ended up in the music business. Over the years that business changed and it became much more marketing orientated and then artists were no longer given the time to develop properly. So I moved away from there to go back to my first love, the cinema.

How does Second Run select its titles?
They’re all films I’ve seen and they’re all films I’d like other people to see. Second Run began life in September 2005. I was an avid DVD collector. The advent of DVD was great for me as you could see films in pretty good condition and in the right aspect ratio. You could order DVD’s from all over the world. But many of the films I wanted to see were just not available anywhere on DVD. Apitchatpong Weerasethakul’s early films for example.

We started with Classic cinema. To bring back things that needed to breathe again. Central and East European cinema especially: Hungarian,Czech and Polish films that had been completely lost from view. Strangely, I had seen a lot of these films when I was growing up in India, which was then a non-aligned nation. The Americans greatly influenced my country through exporting Hollywood cinema. So the Soviet bloc tried to do the same. As a result, films from the Soviet bloc countries would come to India but no one would see them except me! Even here in the UK only the big names made it over, like Andrzej Wajda. So that was a big focus for me, to get those into view again. We cannot stop releasing DVDs: some of these films will never be HD mastered, 35mm projection is gone, and so DVD remains one of the only ways for them to be in circulation.

We release the films we love. It could have died within a year without any positive reaction. We weren’t expecting too much and they were curated without an expectation of big sales. We launched with twenty films, including Nicolas Philibert’s In the Land of the Deaf and Ron Pecks Nighthawks, as I wanted Second Run to be seen to be as broad as possible, very much world cinema rather than any particular theme.

Few tend to know these films. It keeps our ethic evident and makes sure people work with us for the right reasons. Doing just one release a month also means you can be very clear and not put anything out just for the sake of it. We still release one film a month and sometimes supplement that with a box set. We also feel that adding context to these films is really essential. People need to understand why we think these films are worth championing and where they come from. The booklets and on-disc interviews are important for that.

Is there such a thing as a Second Run type of film?
People definitely feel there is! That’s the most amazing feedback I get, that people understand who we are.  Because there are now people and other filmmakers saying, Have you seen this? Would you release this? I feel we’ve got across to people what we were trying to do. One of the things I’m struck by is that, unlike in my previous industry, almost everyone we meet in film is actually really kind and generous to us.Were not a threat to the studios! There’s a camaraderie and respect between the UK’s other excellent specialist labels: Arrow, BFI and the Masters of Cinema.

Have any films become much larger than you would have guessed?
Vera Chytilova’s Daisies is a good example. When we first released it, no one really came to watch it. We were dragging people into see it, with maybe 10 or 12 people in the audience. Last year we did Wilton’s Music Hall for Scalarama and it was completely packed out. Now there’s a whole new audience for it, many between 15 and 25 years old.

Its a slow build with our films and you have to keep working at it all the time.Not many companies have that time to devote to each release. In the 70’s music business, artist development was so important and I follow that model. You take time and build a catalogue that lets you do that. No one thing in particular keeps you afloat.

Are there particular films that have been highlights for you?
One film is Frantisek Vlacil’s Marketa Lazarova.  It had never even been released on home video in its own country. Its almost three hours long, in black and white, widescreen, Czech language, set in the snow and the director was no longer alive. How do you promote a film like that? But I have always wanted to release it and it surprised me the most. People reacted to this amazing film. It slowly became one of our better sellers. Now even Criterion and the Czechs have released it on home video.

Apitchatpong too, of course. We released Blissfully Yours, which had never been released theatrically in the UK. And his Tropical Malady had also not been released on home video here. The films of Mikels Jancas were a definite highlight. A major filmmaker, whose work was no longer seen in the UK. Curzon cinemas did a weekend of his films and we brought Mr Jancas over and went with him from London to Edinburgh screening his films. We’ve now released five of his films and I was very happy that his work began to be seen again before he passed away at the age of 92 last year.

Its your tenth year as a distributor. Was it a conscious decision to do your first theatrical film release now?
It wasn’t a planned thing. With Second Run DVD, the idea was to also release the work of great contemporary filmmakers whose films were not seen in the UK. Now there are many contemporary filmmakers whose great work is never seen even in the cinema, where it should be seen. We wanted to see if we could bring the same kind of ethos to selecting a film and releasing it theatrically. It happened organically. Horse Money hadn’t been picked up at the time and Pedro Costa was very happy to experiment with us and hes prepared a lot of materials for us. Our approach is curatorial and its in the hands of the filmmakers. If there is a response to this, there are many other filmmakers that Id like to release theatrically. Even renowned filmmakers have problems now with releasing the next film they make!

And whats your relationship with Pedro Costa?
I met Pedro Costa because I met Apichatpong and he put me in touch with Pedro, who has now put me in touch with Victor Erice and Lav Diaz. First of all though, Pedro is for me one of contemporary cinemas most important filmmakers. And its not just his own films, but his knowledge of cinema from around the world. He has the history of cinema in his head. Hes also been shooting his later films on digital and shows you what can be done using digital.

Why does the specific space of the cinema matter to you?
I grew up watching films with people. Whatever you do in the first fifteen years of life ends up being very important in what you do! Films were made for people to watch together. I am a 35mm purist I must say, but have learnt to accept and move with technology.

Is there anything you’re desperate to release that’s yet to see the light of day?
Many of things that I thought would never see the light of day are now out there! Rivette’s Out 1 is now being released here thanks to Arrow. Aleksei Gherman’s early films I would love to release now that Hard to be a God is out. Kira Muratova,whose work is totally unseen in the UK. Her early work is stunning. We were moving ahead with her films but then the Russians walked into the Ukraine! Barbara Loden’s Wanda is another. The list doesn’t get any smaller!

Whats the team like at Second Run?
Well, there’s two and a half people, myself included! Were only there because the filmmakers made these wonderful things and because of the response we get from people, the complete help and love we’ve had from people over time. If we took funds from outside investors, the agenda would inevitably change. And so we have to do it ourselves somehow. People react to what we do because its not cynical. It means we remain at a boutique level from choice.

And finally, what effect has Second Run and cinema had on you?
It’s made me into a more empathetic person. It’s brought me amazing friends. It’s kept me happy. I’ve been incredibly lucky to do something I love. I don’t mind working all the hours in a day. I find that as the world gets more conscious of money, as a reaction, there’s another group who keeps things alive because they love them.