Why diversity matters in programming

Why diversity matters in programming

Ahead of our ‘D Word’ Screening Days, we wanted to highlight different approaches to diversity. At the heart of the day is considering different approaches and creating a strategy that works for where you are. Below you’ll hear from an established venue with a mature diversity plan, someone who is just starting to consider their diversity offering and an independent curator to give perspective on what diversity means, how they approach it and why it matters to them.

Amy Smart: ‘Almost everyone has a relationship with film’

Amy Smart is Cinema Producer at mac birmingham. Here she speaks about how diversity can work in an established venue, and how important it is to reflect the make up of their community.

As an independent mixed arts venue in the heart of the city, diversity is at the core of what we do at mac.  With a population of over one million, Birmingham is home to over 187 different nationalities (the smallest of which is one Nicaraguan family).

mac itself is located on the boundary of four very different areas: Selly Oaks international student base, the affluent Harborne/Edgbaston, bohemian Kings Heath/Moseley and Balsall Heath/Sparkbrook which is home to a large South Asian population. Open and accessible, located in one of the city’s most popular parks, mac is used by all these communities and more.

Diversity is embedded within our artistic programme and it’s important to reflect our communities in the work we do, including on screen.

With largely lower ticket prices than other art forms and a much larger source of reviews and endorsements via popular culture, film is perhaps the most accessible art form; almost everyone has a relationship with film.

Film has the potential to be the most representative and diverse art form of our time; it not only reflects changing attitudes, people and places but also has the ability to transport us back in time, forward into the future or to foreign lands providing understanding of other cultures as well teaching us things we might otherwise never learn.

Programming diverse work is as much about equity and leadership, reflecting the diversity in the people programming as well as the content, which is why mac is committed to collaboration and multiple voices. Partnerships ensure diversity in our programme and our audiences. mac’s most recent partnership with the London Indian Film Festival brought a selection of Hindi, Marathi and Bengali titles to the city and with over 300 admissions, new audiences with them.

Celebrating Black History Month last year mac partnered with UK Arts International to host Afrovibes, a touring festival of contemporary South African Performing Arts. Working with BFI FAN, Afrika Eye and Africa in Motion, we presented a short film season to sit alongside the festival, which created an opportunity to piggy back on to other events, increasing the reach and in turn audiences.

Working in partnership with Birmingham LGBT Trust the festival was particularly popular with female audiences and we saw sold out screenings of Sing-along Calamity Jane, Tomboy, Cloudburst, I Am Divine and Pride.

Play Poland has significantly helped develop our Eastern European audiences and working closely with Birmingham based Polish ExPats Association we have seen repeat engagements from Birmingham’s local Polish community and audiences increasing year on year, stand out titles include Papusza, Ida and In A Bedroom. mac also regularly takes part in the Japan Foundation Touring Programme and more.

Our mission – to make art an important part of peoples lives – is predicated on diversity in our audiences, our artists and the work that we programme.

Neil Hepburn: ‘Anything with unfamiliar terrain requires a leap of faith’

Neil Hepburn is Marketing Manager at the Cameo Cinema in Edinburgh. Here he talks about a speculative film screening he helped develop, aimed at making diverse programming approachable to a broad spectrum of audiences.

‘Season of the Witch’ is the title of a film programme I created with Tanya Barras-Hill, Siobhan O’Leary (Strategic Development Co-ordinator at the BFI) and Rosie Taylor (Festival Curator at Afrika Eye), my fellow participants on the ICO’s Cultural Cinema Exhibition course in April. No prizes for guessing what the season is about, but our idea was guided by one of the key themes on the course: diversity.

The season is formed around 2014’s challenging Tanzanian drama White Shadow, which deals with modern day witchcraft (specifically the killing of Albino’s for the black market trade of their organs). The environment, characters and subject matter of White Shadow have rarely been explored in cinema, which creates a challenge in terms of audience engagement. Anything with such unfamiliar terrain requires a leap of faith on the part of most viewers.

The season is designed to help audiences make that jump into the unknown. We wanted to position the film within a broad spectrum of reference points that would hopefully offer a variety of access routes into the world of White Shadow. More than that, we wanted the programme to capture peoples imaginations and get them talking.

So we mixed cult and mainstream favourite’s with more demanding arthouse dramas and included a few wild cards, like the strange, part-fictionalised Swedish/Danish silent documentary Haxan: Witchcraft Through The Ages. We based the criteria for all the films we included on how well they interrogated the idea of witchcraft throughout history and cultures.

The programme was also designed to be accessible to a diverse audience across a wide range of ages. For example, for younger viewers we included Kiki’s Delivery Service, which director Hayao Miyazaki says is about Japanese women’s experience of independence. There’s also The Craft, which, in its representation of empowered teenage girls, goes against the grain of much of its contemporary 90’s teen movie fodder. We aimed to lure genre fans with tent-pole horror classics like Suspiria and Rosemary’s Baby, but hoped that would lead them towards exploring something different, like War Witch, a Congolese drama dealing with difficult subject matter.

It’s by no means an exhaustive list of films relating to the subject of Witchcraft. But we think it does offer a sideways look at the subject.We would hope that the programme would serve as a more accessible route into the less familiar terrain of African cinema.

The season in full 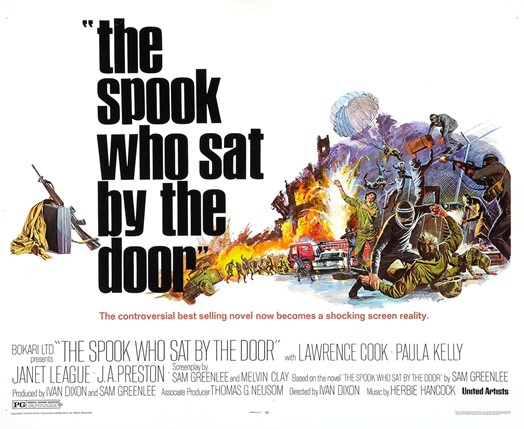 Lynn Nwokorie: ‘All were there to have an experience – the experience of seeing themselves on screen’

Lynn Nwokorie has been part of the African Odyssey’s steering committee at the BFI, which led her to freelance curating work with projects including Film Africa. Having recently joined the ICO as programmer, Lynn reflects on a single screening that made a big difference to her and showed her why sensitive programming matters.

I was introduced to the power of diversity programming when I began working at the BFI. A well-intentioned but wildly uncomfortable conversation led me to a diversity-orientated film strand held at the BFI called African Odysseys. The strand was recommended to me purely by the fact that I was black. I’ll be honest, I was affronted by the idea that the colour of my skin somehow took precedence in determining what must be my film taste and knowledge, over the demonstrable film knowledge that got me the job in the first place. Regardless, I was intrigued and my viewing at African Odyssey’s of The Spook Who Sat by the Door (1973) was a revelation. Before the film had even started, the audiences energy was something else. It was as if I were at the opening night of a much anticipated blockbuster such was the palpable expectancy that filled NFT1. How could a 40-something year-old film create so much excitement?

The make-up of the audience was the first clue to this. The age-old adage that continues to keep diverse programming out of the mainstream, of there not being any ethnic minority audiences to cater to, was completely demolished at this screening. London’s black population came out in force – young and old – alongside sizeable representations of other ethnic groups, with a combination of traditional arthouse types alongside multiplex enthusiasts. All were there to have an experience – the experience of seeing themselves on screen. I don’t mean this in an actual sense, as I am well aware that I and my fellow audience members are not CIA-trained spies. At least I don’t think so. It was the thrust of the story that held resonance with the audience; something that I observed closely. A satire about the civil rights movement in 1960’s USA and one of the first films to seriously consider black militancy, this entertaining Blaxploitation-influenced drama had a great impact on me and, more importantly, sparked an interest in programming.

There followed an equally interesting documentary about the making of the film, which in itself would make a spectacular story, but it was the Q&A that was the true highlight. Despite sitting in a theatre for over three hours at this point, the audience seemed ready to stay for more. Willing and able to have a brilliantly heated and honest discussion about what the film meant to them, I heard all the various reasons why people had come. For the cineastes, it was all about the opportunity to see a banned underground classic in all its glory. For others they had been dragged by older relatives to see the adaptation of the book they had coveted since they were their grandsons age. For people like me it was simple intrigue, to watch a familiar story from a different perspective. What everyone took away from this afternoon of filmic delight was the hunger for this kind of programming was very evident, from all groups and ethnicities.

It came to me on that afternoon diversity programming is the greatest way for film to flourish. Whether from a financial perspective or for the love of the art, audience is key. It is my fundamental belief that it benefits everyone when film is screened from a stance of inclusion. Everyone should have access to film and should have the opportunity to relate on a personal level to what they’re watching. The diversity we get from literature should be the same for film.

There is still the battle for diversity in programming as people still hang on to the idea that its fine to solely show what you know for people you know because you can’t/won’t understand any other way. This in itself creates a cyclical problem. Working on the basis of exclusion limits the capabilities of a film potential, doing a disservice to the filmmakers and audiences alike. The recent popularity of films like Dear White People and repeated sold out screenings of Njinga, Queen of Angola (which will play the Phoenix in East Finchley shortly), not only proves that there exists an audience but that diversifying your programme, unifies your audience. We’re all here to be entertained; to experience something more, such as a new perspective, a different way of thinking, or just to spark discussion is all just a fantastic bonus.