The ICO team recently returned from sunny Croatia, where we were working hard (honest!) running our Developing Your Film Festival course.

This project, funded by MEDIA, Creative Skillset and the British Council, brought together 32 professionals from 30 film festivals from 13 different countries across Europe. Taking place in a medieval hilltop town in the run up to the wonderful Motovun Film Festival, the training provided advice, discussion and insight on three key areas strengthening film festival business models, growing audiences and maximising professional relationships.

For most of the festival professionals attending, this was the first time they had participated in any kind of training specific to their field of work. Many of them used the word therapeutic to describe what it felt like to discover that they encountered the same problems as other festivals… and to work through those challenges with their peers. 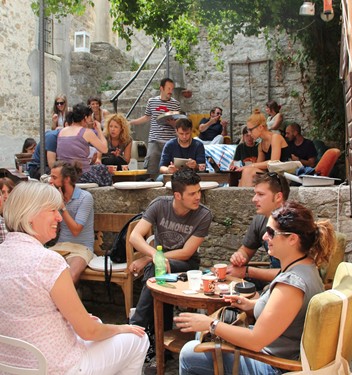 Participants were joined by speakers from across Europe, including Copenhagen Film Festivals, Stockholm Film Festival and the Berlinale.

We heard how Sarajevo Film Festival was established in 1995 during the siege of Sarajevo as an act of cultural resistance, and grew in the face of adversity. Jovan Marjanovic, the festivals Head of Industry, recalled how the arts scene in the city survived and helped people survive.

Algirdas Ramaska, Director of Vilnius International Film Festival, encouraged festival professionals to invest in their own development and to make contacts by travelling to other festivals and networking hard.

And Tomas Prasek, festival consultant and founder of Eventival, urged festivals to become more entrepreneurial, thinking of themselves as events companies, selling services in order to be able to fund the thing they really want to do the festivals.

Developing Your Film Festival is not just about what happens during the week of the course. It is also about creating strong bonds between participating festivals, planting the seeds of collaboration out of which can bloom future partnerships. Participants become members of the European Film Festivals Network, informally initiated at last years course to keep festivals working together long term. Ana David from Queer Lisboa, a participant from 2011, returned to Motovun to share stories of collaborations from her years peers including programme partnerships, staff exchanges and information sharing.