What I Learnt at Young Audiences Screening Day

What I Learnt at Young Audiences Screening Day

On Thursday 2 May, we organised our Young Audiences Screening Day at HOME Manchester and were thrilled to welcome many emerging film programmers from across the UK to the event. Sophie Willard from Saffron Screen Young Film Programmers shared with us her experience of the day.

The huge contemporary arts venue in Manchester – HOME – lives up to the inviting connotations of its name. And for the ICO’s Young Audiences Screening Day event in early May, it was home for a day.

Having arrived the afternoon before, I decided to check out the venue in advance. I went to a screening of the much lauded Eighth Grade, snapped a few pics of the building for the Saffron Screen Young Programmers Instagram, then headed out for dinner.

The following morning, I returned to HOME in the rain for the event registration, gratefully helped myself to some coffee, and after staring out at the second storey view for some time, met Julia Andrews-Clifford, the Film Hub South East’s Young Film Programmers Manager. Julia introduced me to a couple of young programmers from other groups in the South East, and then we were ushered into the same cinema room in which I had painfully watched my teenage years recreated on-screen in Eighth Grade the previous night.

The keynote from Jackie Edwards, Head of Young Audiences Content Fund at the BFI, was not exactly pertinent to the work that we do in my Young Programmers group, but Jackie was an entertaining speaker and she provided useful context regarding the wider industry and the content being created for younger audiences. Her keynote was followed immediately by a session on ticketing schemes for young audiences, presented by Moira McVean, BFI FAN Young Audiences Coordinator at Film London, who shared some useful findings from her research on the barriers preventing young people from attending the cinema.

During the break I caught up with my co-worker from Saffron Screen, who is our YP Group Coordinator, and then I remained in the Event space for the Young Programmers Networking event hosted by Julia. Twelve of us sat in two lines facing one another for five minutes of speed networking, and when the bell rang, one line shuffled down so that we could each meet with someone new. We continued like this for over half an hour, and I soon realised five minutes was hardly enough time per person. Julia provided flashcards which each had a question prompt, but I had so many questions of my own, I barely even looked at my card. 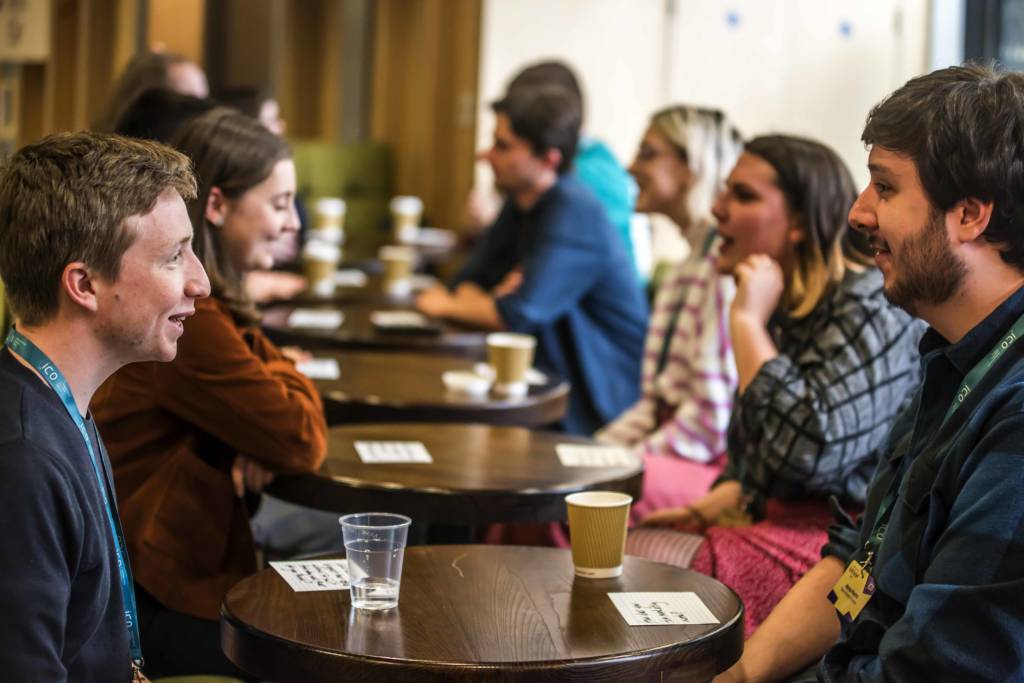 From meeting various people from different venues around the UK, I started to realise that we were nearly all struggling with the same issue, no matter how large our groups or how they are structured. We all wondered: how do we entice young audiences into independent cinemas, particularly to see independent films? Sometimes being isolated from the cities can feel like being in a small bubble that’s disconnected from the rest of the cinema world. But through swapping stories of experiences and successes, it was easy to see that the work we do at Saffron Screen Young Programmers is no less impressive than that being done elsewhere.

Following that, we had the chance to choose from a number of topics to discuss an issue we felt was most relevant to us, or was an area we wanted to improve. I joined a discussion on naming film strands, where we raised the question of how we can name our programming groups without alienating audiences. It was good to get this opportunity to narrow the focus of conversation, and the speed networking offered an invaluable opportunity to meet lots of other people doing similar work. I look forward to further opportunities that will allow us to share ideas with young programmers from other venues and learn more about how they tackle the key issues they face. I think some kind of marketing workshop in the future could be really useful for those of us who rely mostly on grassroots community outreach.

After lunch, I decided it was time to watch a few films, and so settled into Olivia Wilde’s directorial debut Booksmart, followed by Jeremiah Zagar’s We the Animals. The drinks reception was perfectly timed, and already in full swing by the time I left the dark screening room. Out on the balcony the sun was shining, belying a stiff, cold breeze, and I stood out there for a while mulling over the two films with a couple of people I had met, before eventually returning into the warm. This was one last chance to talk with new people about their work and our shared love of finding audiences for amazing films, and slowly as the evening drew on, attendees trickled out to make their journeys back to various parts of the UK.

Overall it was a great first Screening Days experience. Kudos have to be given to the organisational team who did a brilliant job of planning the day and ensuring the events ran smoothly. The registration was a quick, simple process, and there was never any confusion about where events were being held, or how to find them. For those with questions, ICO staff in distinctive t-shirts were on-hand, and refreshments were always available throughout the day. HOME itself is a fantastic venue, and I’m grateful to have had the chance to visit there.

Young Person’s (18-30) passes are now on sale for our Summer Screening Days, taking place at Lewes’ Depot Cinema between 6-8 July 2019.